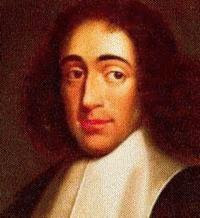 Born in Amsterdam, Baruch Spinoza (1632-77) was a first generation Dutch Jew. His family were Portuguese Jews, his father Michael Espinosa being a refugee merchant, one of those who contributed to the growing prosperity of Amsterdam. There were numerous Portuguese and Spanish Jews in that city at the time of Spinoza’s birth. More specifically, Spinoza’s parents were marranos, or crypto-Jews, who had fled from Portugal. They were amongst those who adhered to elements of Judaism after forced conversion to Christianity. That affliction had occurred in Portugal and Spain, where the Inquisition harassed converts.

Spinoza was educated in the traditional Jewish manner. Studying at a Talmud Torah school, he did not undertake the higher grades leading to Rabbi status. At the age of 17, “whether by desire or by necessity, Spinoza left the school in order to work in his father’s business, which he eventually took over with his half-brother” (Blake D. Dutton, “Benedict De Spinoza,” Internet Encyclopedia of Philosophy). The family business was one of importing and vending foodstuffs. At the age of 24, Spinoza was excommunicated by the synagogue authorities of Amsterdam, being accused of heresies. The context is obscure.

His enthusiasm for the study of Descartes  has often been considered a possible reason for the stigma, though other explanations are proffered. His critical views of the Bible, also his acquaintance with radical Christian groups such as the Collegiants and Quakers, are just some of the alternatives. An economic problem is another possibility, his father having died two years before and leaving numerous debts, as a consequence of which Spinoza hired a lawyer.

At this time, he changed his first name Baruch (which is Hebrew) to the Latin equivalent of Benedict. The heretic became a Latin-speaking neo-Cartesian, moving freely amongst non-Jews. Spinoza could also speak Spanish, Portuguese, Dutch, and Hebrew.

Like Descartes, Spinoza was a citizen philosopher. Academics later assimilated these two figures into the canon of primary rationalist thinkers. Even more than Descartes, Spinoza remained on the fringe of status activities, while struggling against ideological biases of a severe kind.

Spinoza left Amsterdam in 1661, reputedly being in danger from religious extremists. His destination was Rijnsburg. He had adopted the craft of a lens-grinder, working in his own rented living accommodation. He produced lenses for microscopes and telescopes. This activity converged with his strong interest in optics. Some commentators describe this grinding and polishing skill in terms of a “gentlemanly amateur” vocation, which apparently bypassed an apprenticeship. However, the wealthy Dutch scientist Christiaan Huygens (1629-93) evidently respected the knowledge of optics possessed by Spinoza. That science was associated with the Optics of Descartes.

Huygens was a very capable lens-grinder, innovating advanced telescopic lenses. “Huygens had far more money than Spinoza, who was a ‘marrano’ amateur in a Christian world of professionals” (Shepherd 2005:278). At first, Spinoza apparently knew more about microscopes than Huygens, who became celebrated for telescopic discoveries in relation to Saturn. These two grinders had scientific discussions, as a consequence of which Huygens came to regard Spinoza as a rival.

In some commentaries, Spinoza is defined as a rationalist version of pantheist. He did not accept the dualism of Descartes, instead maintaining that there could only be one substance, not three (i.e., God, mind, and matter). Thus God can be equated with Nature. This theme was incorporated into his Ethics (1677), which strongly asserts the existence of God in a rationalist context. The attendant irony is that Spinoza was described and derided as an atheist, by various reductionists, for many years after his death. There is contemporary disagreement about his orientation. Spinozan pantheism has even been interpreted (in one version) as panentheism. However, some commentators argue that the subject was an atheist. Spinoza himself said that the charge of atheism was a perverse misinterpretation of his meaning.

An earlier work was Spinoza’s Short Treatise on God, Man, and His Wellbeing, apparently composed during his retiring phase at Rijnsberg, though not achieving publication until long after his death. This metaphysical book is partly associated with the influence of Leone Ebreo, alias Judah Abravanel, a sixteenth century Jewish philosopher of Portugal now described in terms of Neoplatonism.

Abravanel authored the Dialoghi d’amore, published in Italian in 1535; those dialogues refer in philosophical terms to an “intellectual” love above any human love. This work (which Spinoza read in Spanish)) was “a Neoplatonic presentation” which “contains two of Spinoza’s great goals in intellectual life: that of seeing the world in the aspect of eternity and that of achieving the intellectual love of God” (Popkin 2004:18).

Perhaps acting upon the advice of his academic friend Lodewijk Meyer, Spinoza changed format from the Short Treatise to the geometrical method of Euclid, exhibited in his Ethics. This device he evidently believed to be suitable for conveying reason to a Christian audience. Hispanic-Jewish mysticism would not have appealed to some of his acquaintances. Spinoza himself is far more complex. The philosophical Kabbalist Abraham Cohen Herrera (c.1570-1635) was another of the influences at work on Spinoza (Popkin 2004:19). Research indicates that Herrera’s Puerto del Cielo (Gate of Heaven) influenced some components of Ethics (Beltran 2016).

The distinctive  Puerto del Cielo was composed in Spanish for the marrano community of Amsterdam. Herrera presented a syncretistic format reconciling diverse traditions, including the Sefer Yetzirah, the Zohar, Moses Cordovero (d.1570), Isaac Luria Ashkenazi (d.1572), Aristotelian, Platonist, and Neoplatonist metaphysics, and Scholasticism. The liberal format appealed to Spinoza, Leibniz, Henry More, and others. For Herrera, “the inner being and activities of the God of Israel are also revealed in the teachings of non-mystics and philosophers, Jews and Gentiles alike” (Krabbenhoft 2002:xi).

The Ethics of Spinoza states: “This love toward God must engage the mind most” (Curley 1996:169). Moreover, “blessedness consists in love of God, a love which arises from the third kind of knowledge” (ibid:180), here referring to intuitive knowledge. Such factors were attended by the conclusion: “If salvation were at hand, and could be found without great effort, how could nearly everyone neglect it? But all things excellent are as difficult as they are rare” (ibid: 181).

The “ethical theory” of Spinoza has for long been constricted in modern interpretations; the deficit includes an assumption that the Ethics downgrade ethical considerations. In contrast, a recent conclusion is that the Spinozan perspective may be closer to the truth than the mainstream view now operative, a conservative angle that is basically a descendant of David Hume’s theory of emotion in A Treatise of Human Nature (Youpa 2020:5).

Spinoza does not share Hume’s deduction that reason is a slave of the passions. Hume contends: “Reason is, and ought only to be the slave of the passions, and can never pretend to any other office than to serve and obey them.” This belief is appropriate for sensualists, not others who desire a different context for lifestyle. In contrast, the Ethics includes such statements as: “The actions of the mind arise from adequate ideas alone; the passions depend on inadequate ideas alone” (Curley trans. 3p3).

“The best way of life, in Spinoza’s view, is a life of learning” (Youpa 2020:9). In Spinozan context, this vocation decodes to the solitary ideal of learning that is not undertaken for salary or status profile.

The Ethics is not an easy work to read, resulting in different explanations of diverse passages. The author’s perspective on “eternity of the mind” extends to a factor resisted by some contemporary commentators: “Salvation amounts to achieving the psychological state that accompanies intuitive knowledge of God” (Kisner 2011:4). The favourable juxtaposition of intuitive knowledge (scientia intuitiva) with stringent reasoning has disconcerted some logicians.

The well known reaction of Jonathan Bennett to Spinozan intuitive knowledge interpreted this factor as “an unmitigated and seemingly unmotivated disaster” for intellectual clarity (Bennett 1984:357). Professor Bennett urged that some passages of Ethics are nonsense. Part Five was a hazard zone. The intellectual love of God amounted to a mere indulgence. “I shall not expound the details [of Amor Dei] as the burden of error and confusion has become unbearable” (ibid:370). From another perspective, advantages of the disputed rational/intuitive mix might be substantial, bearing in mind: “Spinoza’s characterisation of our highest good as a psychological state of contentment or tranquillity, one that does not depend on external things and, consequently, is immune to the vicissitudes of fortune” (Kisner 2011:2).

A frequent response to Spinoza, during the twentieth century, was one of relegation. He was eclipsed in popularity by Russell, Moore, Wittgenstein, Nietzsche, and other fashionable exponents. The academic sceptics were glibly reductionist; they did not comprehend a citizen vocation inspired by texts and ideas not fashionable in their time. Anything “mystical” was taboo in the status world of prestige claims to scientific accuracy, accompanied by haphazard assumption.

More recently, the intellectual climate has altered sufficiently to admit a deeper dimension to Spinoza than was formerly credited in general (for example, Soyarslan 2014; Naaman-Zauderer 2019; Joppova 2020). There are nevertheless divided opinions discernible in the field of Spinoza studies. In some respects at least, only marginalised thinking citizens might begin to comprehend the citizen tangent of a reasoning and intuitive ethical philosopher of renunciate characteristics.

The Treatise on the Emendation of the Intellect commences with Spinoza’s advice to renounce wealth, status, and sensual indulgence in the pursuit of the highest good. An unpopular theme today, this was probably not in favour with some of the author’s associates, who were radicals of a different kind. Spinoza did not own property, instead living in simple rented rooms. He avoided a university career, despite his undoubted learning abilities.

In 1670 appeared his anonymous Tractatus Theologico-Politicus or Theological-Political Treatise (TPT). This proved a bombshell of controversy, to such an extent that Spinoza’s Ethics could not be published during his lifetime. The content of the TPT was polemical, pleading the cause of philosophical reason against theological dogmatism. Spinoza was clearly pitting himself against religious sectarianism. He advocated a democratic and pluralist society free of superstitions.

The TPT dismissed miracles, also emphasising textual criticism of the Bible to a notable extent. The author was benign towards Jesus Christ, while rejecting the Resurrection. “His definition of God – condemned since his excommunication from the Jewish community as a  ‘God, existing in only a philosophical sense’ – is meant to preclude any anthropomorphizing of the divine being” (Steven Nadler, “Baruch Spinoza,”  Stanford Encyclopedia of Philosophy).

The prestigious Amsterdam Synod declared the TPT to be blasphemous. Other influential Calvinist Synods were in support of this ruling. In 1674, the Court of Holland prohibited the printing and selling of the TPT. Freedom of speech did not yet exist. The long-term stigmatisation of Spinoza, as an atheist, was one of the consequences.

In 1676, the German philosopher Gottfried W. Leibniz (1646-1716) visited Spinoza in the latter’s modest living situation at The Hague. The “atheist” gains a strikingly mystical complexion in a memo written by Leibniz, featuring such statements as:

According to him [Spinoza] the mind itself is in a certain sense a part of God….He thinks that we will forget most things when we die and retain only those things that we know with the kind of knowledge he calls intuitive, of which only a few are conscious…. He believes a sort of Pythagorical transmigration, namely that minds go from body to body. He says that Christ is the very best philosopher… (W. N. A. Klever, “Spinoza’s life and works” in  Garrett 1996:46-7)

Naaman-Zauderer, Noa, “Spinoza on Human Freedoms and the Eternity of the Mind,” in Naaman-Zauderer, ed., Freedom, Action, and Motivation in Spinoza’s Ethics (Routledge, 2019).

——–A Book Forged in Hell: Spinoza’s Scandalous Treatise and the Birth of the Secular Age (Princeton University Press, 2011).

Soyarslan, Sanem, “From Ordinary Life to Blessedness: the power of intuitive knowledge in Spinoza’s Ethics” (236-57) in Kisner and Youpa 2014.