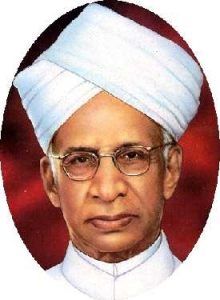 A major exponent of Hinduism was Sir Sarvepalli Radhakrishnan (1888-1975), whose Indian Philosophy (2 vols, 1923-27) became a textbook on the subject. Born in South India, he early encountered the writings of Swami Vivekananda (1863-1902), who influenced him strongly in the new mood of Vedantic universalism struggling against rival emphases of Christianity. This was the era of British Raj imperialism, in which Hinduism was the runner-up.

Originating at the town of Tirutani in Andhra Pradesh, Radhakrishnan was born into the brahman caste and reared to Vedantic teaching. In 1904 he entered the Madras Christian College, where he studied Western philosophy. He  observed the Christian criticism that Vedanta had no ethical content. He was subsequently able to repudiate the aspersions, becoming a professor at Mysore and Calcutta Universities.

His early writings railed at the critics of Hinduism. In 1921, Radhakrishnan gained the prestigious George V chair in philosophy at Calcutta University, where he composed his Indian Philosophy, a mature work not relying on polemic. In 1926, he was invited to Oxford to give the Upton Lectures; a sequel occurred in the Hibbert Lectures of 1929. These addresses achieved publication as The Hindu View of Life (1927) and An Idealist View of Life (1932). The lastmentioned is widely regarded as his more developed work.

In 1931 Radhakrishnan was knighted by the British government, whose policies he had not always agreed with. He subsequently became a professor of religion at Oxford University in 1936, the association with Oxford continuing for many years. His informed books caused a wide readership in the West to give serious consideration to the formerly marginalised Indian philosophy. His reflections include:

One is confronted by the difficulty of defining what Hinduism is. To many it seems to be a name without any content. Is it a museum of beliefs, a medley of rites, or a mere map, a geographical expression?  Its content, if it has any, has altered from age to age, from community to community. It meant one thing in the Vedic period, another in the Brahmanical, and a third in the Buddhist.  It means one thing to the Shaivite, another to the Vaishnava, a third to the Shakta. (Radhakrishnan 1927:11-12)

He favoured the teaching known as Advaita Vedanta. Radhakrishnan inclined to a modernised version of this outlook, which elevates the atman-Brahman themes of nondualist identity. He defended and elaborated the factor of intuitive experience which is inherent in that teaching. “All sects of Hinduism attempt to interpret the Vedanta texts in accordance with their own religious views” (ibid:23).

A frequent criticism of Radhakrishnan is that he tended to claim Advaita as a yardstick of assessment for all religions and philosophies. He also tended to ennoble the caste system in some arguments, even while recognising the problems in Hindu society.

“In a sense, Radhakrishnan ‘Hinduizes’ all religions,” in the context of Vedantic interpretation. The same commentary deduces the view of this Indian philosopher as meaning: “Religious claims…. ought not to be taken as authoritative in and of themselves, for only integral intuitions validated by the light of reason are the final authority on religious matters” (Michael Hawley, “Sarvepalli Radhakrishnan,”  Internet Encyclopaedia of Philosophy).

“Radhakrishnan clearly preferred to be called a philosopher rather than a theologian” (Shepherd 1995:580). To this remark, I felt obliged to add: “Almost in the manner of a theologian, he wrote that the scheme of social classes and ashramas is helpful but not indispensable” (ibid). The priestly adjuncts of Indian religion are now closely debated by diverse commentators.

“Never in the history of philosophy has there been quite such a world-figure.” This assessment of Radhakrishnan comes from Life and Writings, citing the philosopher George P. Conger (d.1960). Radhakrishnan undeniably achieved a widespread influence. While famous at Oxford, his administrative appointments extended to Benares and Delhi Universities; he was the Indian ambassador to Russia, and in 1952 became the first Vice-President of India. Radhakrishnan was subsequently the President of India during the years 1962-67. Conger also reflected: “Among the philosophers of our time, no one has achieved so much in so many fields as has Sarvepalli Radhakrishnan.”

Bertrand Russell is not associated with Vedanta. However, he honoured Radhakrishnan in a significant statement:

It is an honour to philosophy that Dr. Radhakrishnan should be President of India and I, as a philosopher, take special pleasure in this. Plato aspired for philosophers to become kings and it is a tribute to India that she should make a philosopher her President. (Interesting Facts)

In contrast, the Dalit leader Dr. Bhimrao Ambedkar, and other Indians, were critical of the conservative orientation of Radhakrishnan, implying a degree of hypocrisy in relation to social issues. Radhakrishnan is viewed by sceptics as a supporter of the caste system and the Manusmriti, a document influencing orthodox codes. Rahul Sankrityayan (1893-1963) described Radhakrishnan (in the 1940s) as an orthodox religious preacher. The eminent Vedantist did not do anything to offset caste biases. Whereas Sankrityayan was a brahman who converted to Buddhism; fluent in nine languages, this scholar also became a political activist against British colonialism, being jailed a number of times. Sankrityayan argued that Hinduism made a third of Hindus untouchable.

A current issue in India is the priority of Radhakrishnan over Jyotirao Phule (1827-1890) as an educationist (Kanwal Bharti, Why remember casteist Sarvepalli Radhakrishnan on Teacher’s Day, 2018). A pro-bahujan argument is that only the British made education universal, not the Hindu rulers. Phule, a low caste shudra, was educated at a Scottish Mission School. He subsequently created innovative schools for bahujans and women. The word bahujan was employed by Ambedkar and Phule in relation to a majority (including Dalits) who were victims of caste oppression in Hindu society. Phule compared the depressed bahujan category to slaves in America (Bahujan Samaj).