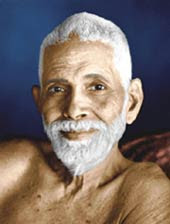 A version of Advaita Vedanta was taught by Ramana Maharshi (1879-1950). Report of him was pioneered in India by Narasimhaswami, and in the West by Arthur Osborne and others. Ramana was subsequently assimilated to some controversial American versions of Nondualism. The Western “neo-Advaita” has aroused scepticism.

Ramana was the son of a brahman (a member of the Hindu priestly caste) who worked as a lawyer at Tiruchuzi, a village in the Tamil sector of South India. His real name was Venkataraman Iyer. After his father’s death, some of his relatives moved to Madurai, a city in Tamil Nadu. Here in 1896, while still sixteen, Ramana underwent an experience variously described in terms of “awakening” or “death.” The belief subsequently developed that he gained “enlightenment” or “realisation” at this time. Another phrase used is “sudden liberation.” There are different accounts of this episode, together with fragmentary reminiscences of Ramana himself in much later years.

“Later followers subsequently rationalised this event as a sadhana [spiritual discipline] which lasted half an hour and was completed on the spot. They wanted to believe that he [Ramana] had gained the ultimate realisation known as sahaja samadhi in this brief period of awakening, though he himself did not say that” (Shepherd, Some Philosophical Critiques and Appraisals, 2004, p. 153).

In an early biography, B. V. Narasimhaswami supplied a description of the 1896 “death” episode implying a controlling sadhana on the part of the subject. Ramana actually said: “The fact is, I did nothing.” The influential version of Narasimhaswami resorts to the first person “I” in statements attributed to Ramana. However, the author does acknowledge his innovation by informing: “The exact words have not been recorded.”

Ramana retrospectively referred to his “absorption in the Self [atman].” There is the complexity that he also described his “awakening” in terms of possession, apparently his early reaction to the experience, which he conveyed to his first biographer Narasimhaswami (David Godman, Life and Teachings).

The “awakening” occurred at Madurai, where Ramana was afterwards in the habit of visiting the Meenakshi temple, associated with Shiva-bhakti and the sixty-three Shaiva Tamil saints of the nayanmar tradition. “After the Awakening I went there [to the temple] almost every evening” (Osborne 1954:23). He had read a book (the Periya Puranam) on those saints which inspired him. In his later life, he acknowledged the significance of bhakti (love, aspiration), which is something quite different to the Advaita doctrines. Indeed, his own report states, of his continuing visits to the Meenakshi temple (after his “awakening”), that he would sometimes pray for the descent of divine grace “so that my devotion [bhakti] might increase and become perpetual like that of the sixty-three saints” (Osborne 1954:23). This is not the language of Advaita, contradicting the much later devotee insistence upon an immediate non-dual “enlightenment.”

At the end of August 1896, Ramana experienced “a deep state of absorption in the Self” to quote a popular online version. He soon left home, journeying north to the pilgrim town of Tiruvannamalai, there staying in temple precincts while subject to an abstracted state. He eventually settled in caves at nearby Arunachala Hill, strongly associated with the deity Shiva. The basic feature of that early period is one of acute introspection. He was no longer a brahman, having jettisoned the sacred thread signifying caste status. He was now an ascetic sadhu wearing a loin-cloth, not the ochre robe of Vedantic renunciates. Ramana was not an official Vedantin or sannyasin.

Devoted attendants saw to his simple needs and protected him from intrusions, diverting unwanted sightseers who thronged the pilgrim locale of Arunachala. At first, his introspection was so acute that food had to be pressed into his mouth in order to keep him alive. Afterwards, he is reported to have accepted only a single cup of food daily; he was accordingly emaciated. For years (until circa 1906) he would not speak to visitors. Indeed, he is reported to have lost his ability to speak normally until that juncture. A different kind of problem was jealous sadhus, local holy men who resented his increasing fame.

A visiting group of sadhus expressed an extremist belief that their own distant sacred hill was home to a rishi who had been practising austerities for thousands of years; this entity had told them to abduct Ramana for initiation, after dramatically preparing him for the attainment of occult powers or siddhis. “Whether hemp addicts or alcoholics (or both), they evidently entertained some of the more fantastic and predatory ideas associated with Tantric Yoga” (Shepherd 2004:155). Ramana is reported to have made no response to these visitors; he never expressed esteem for siddhis, which are an unhealthy preoccupation.

Ramana was reputed to be in samadhi, a word signifying spiritual absorption, though comprising a diffuse blanket term in popular usage. The basic event discernible is that he emerged from this absorption over a lengthy period, gradually normalising in his response to the outside world (while retaining his spiritual awareness, according to his own account). “At some obscure date he began to walk about the hill instead of sitting motionless” (ibid:154). He would refer to himself as a jnani (knower, gnostic), not as a yogi. Ramana warned about the pursuit of siddhis. He was averse to yogic exercises, which he evidently viewed as a complication. 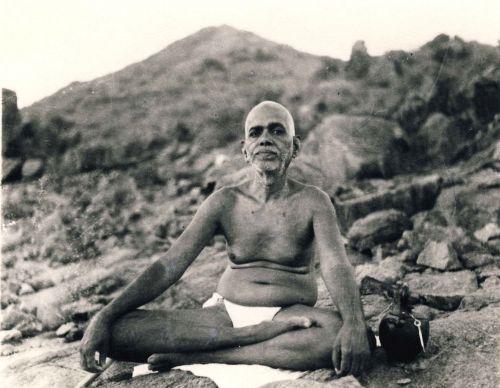 In 1922 he moved down to the foot of Arunachala Hill, taking up residence at the site which became known as Ramanashram. By 1926, the increasing crowd of visitors and devotees was sufficiently large to hinder his customary daily walk around the hill, which thereafter ceased, apparently because nobody wanted to stay behind at the ashram without him.

The concession to public spotlight, at an ashram, was accompanied by some unusual characteristics. Ramana retained a very simple lifestyle. He did not refuse visitors, but could seem indifferent to company. His statements tended to brevity; he seems to have abbreviated his jnani emphases if he considered that the audience was uncomprehending. Preferring informal conversation, he was notably averse to giving initiations, an accepted part of the popular Hindu spirituality.

Ramana was often requested by admirers for permission to adopt the life of renunciation. He generally opposed this desire, a persistent trait which caused puzzlement. According to him, the effort needed was internal, and nothing to do with the formal vow of sannyas (renunciation). He evidently regarded many of the renunciates as rather distracting sources of misinformation.

“He stressed the discipline of vichara (self-inquiry), which he advocated to many visitors in the spirit of Advaita [Nondualism]. He disliked the stale expositions of Vedanta associated with pundits, and he is interesting because he was completely independent of organisations like the Shankara Order” (Shepherd 2004:157).

Vichara has been considered an innovative feature of his communications, relating to the “realisation of the Self,” a Vedantic theme prone to abuse and facile interpretation. The protractedly introverted and normalising “realisation” of Ramana, in his early years, contrasts with glib assumptions about achieving “Nondualism” and “Self-realisation,” contractions frequently encountered in both India and the West. The fantasised “short cut” is not convincing to some analysts, though very appealing to overnight gurus. The facile scenario of effortless enlightenment is well known in relation to the American guru Andrew Cohen. Ramana’s emphasis on the constant practice of self-enquiry is often abbreviated to slogans like “Be as you are,” singularly convenient for exploiters. Related mantras have become pervasive in the “new age” of commercial mysticism.

A lop-sided view of Ramana Maharshi in his later years, as an abstracted contemplative, has been corrected by partisan writer David Godman. Ramana industriously prepared food at his ashram for about 15 years; he also closely supervised building work during the 1930s. He was evidently not too keen about having to sit in the audience (darshan) hall where he received all visitors; he often referred to that hall as his prison.

Although an unusual teacher (and one who did not describe himself as a guru), Ramana was not venturesome in the area of social reform. According to a well known commentator, he “did not disapprove of orthodoxy in general” (Osborne 1954:77). Ramana certainly did not condemn caste norms, which were reflected to some extent in the emerging ashram management run on conservative lines. The management staff was headed by his brother, a renunciate who wore the ochre robe. The increasing number of visitors during the 1940s imposed changes, including the building of a new and more imposing audience hall to which the sage was averse.

“A brahman code prevailed in the kitchens, where only brahmans could prepare the food” (Shepherd 2004:156). However, free food was dispensed to sadhus and the poor on a daily basis. The formalism of management officials is reported to have been resented by visiting devotees; there was even a request that the management be removed (Osborne 1954:120).

The ashram dining hall was partitioned, the orthodox brahmans sitting to one side, while on the other side sat the lower castes, non-Hindus, and liberal brahmans. “Sri Bhagavan [Ramana] says nothing to induce Brahmins either to retain or discard their orthodoxy” (Osborne 1954:133). However, “he often turned a blind eye when devotees violated caste rules” (Godman, Bhagavan the Atiasrami). His perspective is described in terms of: “He had no opinions on these scripted events [occurring in the world], and no desire to change their course” (Godman, Bhagavan and Politics).

This situation can easily disappoint. However, Ramana did make certain gestures in defiance of caste biases. During the daily recitation known as Veda parayana, he allowed all visitors to attend. This was “a flagrant violation of caste rules,” because only the higher castes were entitled to hear scriptural chants. Ramana ignored related complaints from high caste persons. A visitor from North India once disapprovingly confronted him on this issue. Ramana “curtly told him to sit down and mind his own business” (Godman, Atiasrami, linked above).

In some of his statements, Ramana appeared to endorse the political career of his contrasting contemporary Mahatma Gandhi. These two entities never met. At that period, untouchables (Dalits) were not allowed into Hindu temples, including the strongly resistant Shiva temple at Tiruvannamalai. Gandhi attempted to change the conventional high caste attitude. He was murdered by a brahman assassin.

After the death of Ramana Maharshi, the belief developed amongst devotees that the saint “guides whoever approaches him” (Osborne 1954:194). Such beliefs about posthumous guidance are also found in relation to other deceased Indian saints like Sai Baba of Shirdi. Hagiography easily accumulates in such climates of expectancy.