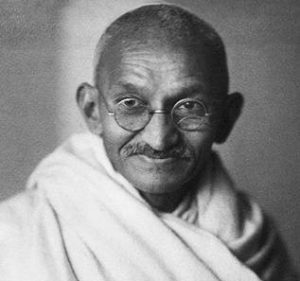 Mohandas Karamchand Gandhi (1869-1948) was born in Gujarat, Western India. He moved to London for his training as a lawyer, thereafter spending over twenty years in South Africa. His role as a civil rights activist facilitated his subsequent role in Indian Independence. He became leader of the Indian National Congress.

“Gandhi’s own Collected Works, ninety volumes of them, are but a part of the primary evidence now open to scrutiny” (Brown 1989:3). I do not claim to have read all those ninety-eight volumes; however, I can state that I found the CW in the early 1980s at Cambridge University Library, feeling amazed that the author had so much output. Most of the Western philosophers and politicians have nowhere near that bulk of material in their name. The nine volumes of Swami Vivekananda were here eclipsed in terms of bulk.

Gandhi committed himself to celibacy in 1906. Many of the published queries come from married Westerners who cannot easily understand this aspect of traditional Indian lifestyle. Some of these critics should perhaps be saying: if more people were like Gandhi, there would be far less overpopulation and pollution.

In 1909, he published the pamphlet Hind Swaraj (Indian Home Rule), envisaging swaraj in terms of a radical return to moral roots and traditional civilisation. “His main concern was not with British rule but with the divisions among Indians that had made this possible from the 18th century, and with what he interpreted as India’s moral crisis, as so many of its leaders in politics and the modern professions seemed to be enslaved to the values of Western civilisation and to be intent on creating an Indian version of a Western state” (Brown 2011:5).

The Dandi Salt March in March 1930 was a protest against the salt tax imposed by the British monopoly. Afterwards, in May 1930, while Gandhi was in jail, many of his supporters trekked to the Dharasana Salt Works, north of Bombay. Here six British officers gave an order for Indian policemen to attack the peaceful and unarmed protesters with steel-lined lathis. The violence was extreme. Over 300 victims were injured (Hatt 2002:32-34). “Not one of the marchers even raised an arm to fend off the blows” (Fischer 1951:343). The hospitalised protesters were in agony, suffering fractured skulls and broken shoulders. An eyewitness reported: “Hour after hour stretcher bearers carried back a stream of inert, bleeding bodies” (ibid:344).

International observers now concluded that the British had gone too far in their colonial oppression. Rabindranath Tagore commented, in a Manchester newspaper: “Europe has completely lost her former moral prestige in Asia. She is no longer regarded as the champion throughout the world of fair dealing and the exponent of high principle, but as the upholder of Western race supremacy and the exploiter of those outside her own borders” (ibid).

Sir Winston Churchill has been accused of racism. He reacted strongly to Gandhi. A well known adverse reflection of Churchill dates to 1931. The British politician here described Gandhi in terms of “posing as a fakir of a type well known in the east, striding half naked up the steps of the viceregal palace, while he is still organising and conducting a campaign of civil disobedience, to parley on equal terms with the representative of the Emperor-King.”

In March 1930, Gandhi wrote a significant letter to the Viceroy Lord Irwin, describing British rule in terms of a curse impoverishing millions “by a ruinously expensive military and civil administration.” He stated that the Viceroy enjoyed a salary over 5,000 times the average income of India.

Congress demanded Indian Independence in 1930. This prospect was not recognised by the British Raj, who maintained control of the country for another seventeen years. In 1942, Gandhi launched the Quit India Movement. The British responded by jailing him and many other Congress members. Subsequently, activists launched protests and strikes in parts of North India. They damaged police stations, railway stations, and post offices. These protesters resorted to over 600 bomb explosions.

The Raj officials were furious, instigating over 90,000 arrests. The British mood was retaliatory, using public flogging (and even torture) as a deterrent. Lord Linlithgow gave orders for the aerial bombing of a disruptive crowd at Patna (in Bihar). Resistance was vanquished by mid-1944. The political prisoners were released at the end of World War Two.

Meanwhile, Gandhi struggled to maintain a national unity, initially confronting 1920s religious riots between Muslims and Hindus. In 1946, Muhammad Ali Jinnah opposed his plans, pressing for the Pakistan partition. The British Raj accepted Jinnah’s plan of partition. A bloodbath followed. More than half a million Indians were killed in the divisive Muslim/Hindu riots. The streets of many towns and cities were strewn with corpses. Gandhi fasted and appealed for peace. He was murdered by a Hindu extremist in 1948.

Jawaharlal Nehru (1889-1964) was a Westernised politician who could not understand Gandhi’s rejection of the celebrated Industrial Revolution. Gandhi distrusted modernity, preferring the rural spinning-wheel to jetset technology. At the end, he tried to persuade Nehru (the future Prime Minister) to adopt simple living – to abandon the great house he planned to occupy, and instead move into a village hut. The message amounted to: politicians should live in the village huts, not in palaces or mansions (Wolpert 2001:8). Nehru preferred to live like the British elite, and was not the only instance of this disposition.

Gandhi stated: “I believe that if India, and through India the world, is to achieve real freedom, then… we shall have to go and live in the villages – in huts, not in palaces” (Wolpert 2001:8).

The urbane Nehru (educated at Harrow) committed India to a policy of industrialisation, even envisaging an Indian nuclear weapons capability. Since that period, the Indian government has substantially furthered industrialism and military projects. The poisoned rivers are not the only danger. Subsidence in major cities will be one outcome of climate change. The mounting air pollution and increasing temperature could too easily kill millions of people. The industrial plan to urbanise half of India by 2050 represents the folly of imitating Britain and the West. Vanishing groundwater will not be replaced by useless flights to the moon, or even Mars. “Delhi, Mumbai, Chennai, and Kolkata are in peril; land subsidence is increased by dams” (Climate Science and Denialism).

Gandhi was assassinated by a brahman extremist who hated Muslims, asserting that his victim was pro-Pakistan. In reality, Gandhi resisted the Pakistan partition. Attempts to legitimise the murder became influential in 2014, strongly associated with the Hindu nationalist party. “The RSS and the Hindu Mahasabha have made money by glamourising the killer of Gandhi” (Setalvad 2015, Introduction). The Rashtriya Swayamsevak Sangh (RSS) nurtured a dislike of Gandhi prior to his death (Ramachandra Guha, How the RSS Detested Gandhi).

Statues and memorials of Gandhi have been attacked by nationalist fanatics (Gandhi’s Killer). “Smash Gandhi” decodes to misinformation and ecological disaster, the process of global warming now being out of control, assisted by the strategy of ambitious politicians and business corporations around the world.

Parel, A. J., Gandhi’s Philosophy and the Quest for Harmony (Cambridge University Press, 2006).