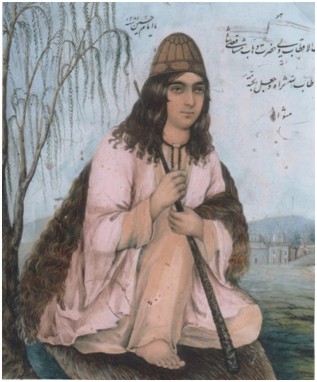 Shihab al-Din Yahya Suhrawardi (d.1191) was an Iranian who became known posthumously as Shaikh al-Ishraq, meaning “teacher of illumination.” He was educated at Maragha and Isfahan; his early training was apparently in the Peripatetic or Aristotelian philosophy associated with Ibn Sina (980-1037).
Suhrawardi afterwards travelled to Anatolia, where he resided for some years, studying with Fakhr al-Din al-Mardini (d.1198), a Peripatetic and apparently also a Sufi. The rare “Aristotelian Sufi” vocation appears to be important in the instance of Suhrawardi, a role which is not easy to elucidate because of the barriers generally assumed to exist between the different categories involved. Aristotelians were not usually Sufis. Many orthodox Sufis were averse to Greek philosophy. The relevant milieu is largely forgotten.

Suhrawardi also became a Sufi. Shahrazuri tells of his extreme austerities and his spiritual powers, yet he is not recognised by most Sufi writers and biographers as one of them…. Perhaps the explanation is simply that he learned from the Sufis but never fully joined them, as Shahrazuri seems to imply. (Walbridge 2000:13-14)

Various biographies give details. According to the early biographer Shahrazuri (died after 1288), Suhrawardi was “much in the company of Sufis, from whom he benefited.” This fraternity seems to have occurred during a period of wandering, of uncertain duration, in Iran and Anatolia. Although he sometimes adopted the garb of Sufis, Suhrawardi also wore the attire of commoners, once being mistaken for a donkey-driver. He reputedly donned headgear associated with the Turkish and Kurdish peoples. Shahrazuri says that the subject tended to maintain silence, keeping aloof from interruptions. An apparent contradiction is that Suhrawardi was reputedly welcomed at the Saljuq court in Rum, gaining a degree of aristocratic patronage, though not permanently.
From Anatolia he moved on to Syria. In 1183, Suhrawardi arrived at Aleppo, wearing the attire of a dervish (Sufi mendicant). That same year, the Ayyubid ruler Saladin captured Aleppo, giving his son al-Malik al-Zahir the role of governor. Suhrawardi gained favour with this governor, while arousing the hostility of local jurists and ulama (scholars of the Quran and hadith). Becoming a tutor to the governor, Suhrawardi was formidable in debates with the jurists. He defended the views of philosophers against the biases of ulama canonists.
“Sometimes he wore the woollen garb of the Sufis, sometimes the silk dress of the courtiers” (Nasr 1996:126). His orthodox opponents accused Suhrawardi of claiming prophecy and practising magic. Shahrazuri says that these were slanders. The earlier heretic Hallaj (d.922) had been the recipient of similar accusations. Suhrawardi’s “short and tragic life contains many similarities to the life of Hallaj, whom he quoted so often” (ibid). However, Hallaj was not a philosopher but a mystic. There are differences discernible in the extant teachings of these entities.
The opponents of Suhrawardi affirmed that he would corrupt the faith of the prince whom he tutored. Qadi al-Fadil, a jurist of Aleppo, sent a letter to Sultan Saladin at Damascus, urging that Suhrawardi should be executed for heresy. Saladin ordered his son to comply with the prescribed penalty of the jurists and ulama. The prince of Aleppo was reluctant to do so; however, he capitulated at the prospect of his enforced abdication.
Suhrawardi was executed, becoming known as al-maqtul (the murdered). The circumstances are obscure. Different versions of his death were described, including strangulation and crucifixion. The uncertainties extend to his age at the time of decease. Suhrawardi is often thought to have been in his late thirties when he died; however, the attributions of age vary from 36 to 50. Contrasting interpretations of his demise add to the confusion. Some analysts think that his teaching would have been mistaken for Ismailism by the orthodox Sunni camp associated with Saladin, the ruler of Egypt who burned the Fatimid libraries in Cairo and persecuted the Egyptian Ismailis.
Suhrawardi’s major work was Hiqmat al-Ishraq (Philosophy of Illumination). His corpus as a whole is the subject of different interpretations. He affirmed a theme sometimes described in terms of “wisdom of the ancients.” This is not a Peripatetic teaching and nor a Sufi doctrine, instead being traced to Neoplatonist precedents.
Suhrawardi appears to have rejected his early affiliation to the Peripatetic philosophy of Ibn Sina, preferring an eclectic approach deferring to the “ancients.” When he learned Greek philosophy via Arabic channels, he not only became familiar with concepts of Aristotle, but also themes of Plato and Neoplatonism. The Neoplatonist writers include Porphyry, Iamblichus, and Proclus. Their works “contain a great deal that seems familiar to a reader of Suhrawardi and the other Illuminationists” (Walbridge 2000:65). Plotinus was known to Suhrawardi via the so-called Theology of Aristotle, a “translation” of Enneads amounting to an interpretation of Plotinian thought  in Arabic guise.

Suhrawardi believed that his ishraqi or illuminationist approach had commenced long ago with ancient sages, culminating with Plato in the West and pre-Islamic Persian sages in the East. To this schema was added legendary extensions associated with Egypt, India, and China. The “Khusrawanid leaven” of pre-Islamic Iran was here claimed to link with the early Sufis Abu Yazid al-Bistami,  Hallaj, and Abu’l Hasan al-Kharaqani. Whereas the “Pythagorean leaven,” identified with Greece, was claimed by Suhrawardi to achieve renewed transmission via Dhu’l Nun al-Misri, the Sufi mystic (and Hermeticist) of Akhmim.
Suhrawardi claimed that hikmat (wisdom or philosophy) originated from Hermes, whom he viewed as a prophet. He employs a distinctive terminology, separating his ishraqi outlook from the Peripatetic. He introduced the term al-ishraqiyyun (the illuminationists) to describe partisans of a different philosophical standpoint to the Peripatetics (al-mashshaiyun) or followers of Aristotle, whose chief expositor in the Islamic world was Ibn Sina, known in Christian lands as Avicenna.
A recent interpretation avers that, although related to the Ibn Sinan corpus, the ishraqi philosophy comprises an attempt to “avoid the logical, epistemological and metaphysical inconsistencies” of the rival corpus (Ziai 1996:438).
A lengthy work is Suhrawardi’s Arabic treatise Paths and Havens, in which he claims that “his own principles of Oriental philosophy (al-asl al-mashriqi) reflect the earlier ‘wisdom’ of Persian Khusrawani sages and many other figures” (Ziai 1996:440). The complex issue of “Oriental philosophy” has not registered any unanimous modern conclusion; however, this subject is generally associated with Suhrawardi’s denial of an earlier claim of Ibn Sina in this idiom. No geographical location is necessarily implied. The Oriental/Eastern theme entailed an “emphasis on intuition, inspirational and immediate modes of cognition” (ibid:439-40).
Suhrawardi clearly departed from reliance upon the Aristotelian syllogism and accompanying method of demonstration. One of his emphases, found in Paths and Havens, reads: “The starting point of philosophy is in abandoning the world, its midpoint is the vision of the Divine Lights (al-anwar al-ilahiyya), and its end has no limit” (Ziai 1990:25).
Such contentions did not converge with Peripatetic doctrine. Renunciation was not the standard practice in the Ibn Sinan camp, being instead associated with the Sufi lifestyle. “In contemporary Western philosophy, the concept of a renunciation is largely or completely incomprehensible within the academic sector.”
Suhrawardi did not necessarily envisage a permanent abandonment of the world, to judge from his own career. However, unless a basic renunciation lodged sufficiently in the psyche, a confusion could easily result, as with the well known indulgences of Ibn Sina that impaired the latter’s health. Shahrazuri refers to this drawback, while Suhrawardi indicates other problems:

They [the Peripatetics] devoted excessive attention to secondary aspects of logic, science, and philosophy. Thus, for example, they devised elaborate rules for handling various composite forms of the syllogism when researchers actually need only simple, very general rules for avoiding error. (Walbridge 2000:138)