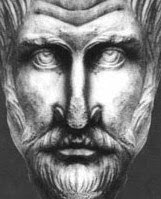 Proclus (412-485) was head of the Athenian school of Neoplatonism, shortly before paganism was suppressed by the Byzantine emperor Justinian. His prodigious output reflects the full-blown phase of Neoplatonist exegesis, which had departed from the Plotinian version.

Born in Constantinople, his Greek parents came from the upper class; his father was a law official in the courts. Proclus was educated in Alexandria, still renowned for a classical study curriculum. That syllabus included philosophy, in general part of the career vocation available to the Greek-speaking upper class. Like many others, Proclus was training for a professional role. Upon his return to Constantinople, he became a lawyer, as his father had intended.

He afterwards decided that philosophy was the most important subject, and returned to Alexandria. There he studied the corpus of Aristotle. Under a separate tutor, he became proficient in mathematics. Proclus moved to Athens, a city still enjoying a reputation as the hub of philosophical activity. From 431 CE he studied at a (Neo)Platonist school led by his tutors Plutarch and Syrianus. When Syrianus died in 437, Proclus became the head teacher or scholarch, a position he maintained for the rest of his life.

The curriculum of his school did not represent a pristine Platonism, having absorbed the agenda of Iamblichean Neoplatonism, which displaced the Plotinian version. This development meant that theurgy was a primary interest, reflected in various ritualistic activities. Proclus himself is reported to have practised theurgic rituals in his otherwise studious routine. He never married, and was a vegetarian.

The major source is the Life of Proclus, composed by his successor Marinus of Neapolis, and in part hagiographical. This account refers to his vigils and fasts. During his temporary exile in Lydia, Proclus gained initiation into diverse mystery cults. This activity demonstrated a theurgic outlook, in which the ritual Mysteries were venerated and pagan ceremony glorified in the face of encroaching Christianity.

Recent scholarship has revealed that Proclus acquired a lavish annual income of 1,000 gold solidi, equivalent in contemporary terms to over half a million dollars. The patrons of theurgy did not neglect to support his activities. His surroundings were basically opulent. Proclus is associated with the Athenian cult of Asclepius,  the focus of a temple near his residence (located in the vicinity of the Acropolis).

His substantial learning is evident from his books. However, much of his corpus is lost. His religious beliefs, quite strongly accentuated, are absent from his commentary on Euclid’s Elements of Geometry, in which he demonstrates “a thorough grasp of mathematical method.” In quite another direction, only fragments exist of his partisan commentary on the Chaldean Oracles, a theurgic text which became so influential amongst Neoplatonists. Different again is his Elements of Theology, containing propositions and proofs in the geometric mode associated with Euclid. Unique in antiquity, the Elements is often regarded as his most important work.

Proclus is also noted for his commentaries on Plato, not all of which have survived. His extensive commentary on the Timaeus has been considered the most important available on that text. Proclus regarded Plato as a divine prophet, an attitude symptomatic of the rivalry with Christianity.

Critics say that Proclus made Platonism into a theology supported by theurgy. His lengthy Platonic Theology has more generously been described as “a magisterial summa of pagan Hellenic theology.” In this text,  Proclus was “eager to demonstrate the harmony of the ancient religious revelations (the mythologies of Homer and Hesiod, the Orphic theogonies and the Chaldean Oracles) and to integrate them in the philosophical tradition of Pythagoras and Plato” (Stanford Encyclopaedia of Philosophy).

The subject of theurgy is controversial. Proclus advocated theurgy in his treatise On Hieratic Art, only partially extant. The Neoplatonist version should be distinguished from magic, despite certain resemblances in ritual practices, including invocations. Critics regard the ritualism as a retrogression from Plotinus. Proclus converged with Iamblichus in the belief that theurgy was a means of salvation compatible with Platonism, which referred to the gods.

Three types of theurgy have been discerned in Proclus. The first category is ritualistic, concerned with the evocation of oracles and divine visions, also involving the “animation of statues,” a distasteful subject to some analysts. The second category is associated with the Hymns of Proclus, representing a more aspirational use of prayers and invocations. The third category relates to unity with the One, celebrating such matters as silence, “negative theology,” and “faith” (pistis). Complexities are still debated.

Some years after the death of Proclus, Damascius (c.460-c.540) became leader of the Athenian school by 515; he  is credited with producing a revival of philosophy. Damascius cultivated a critical attitude to the adoption of theurgy. His Philosophical History furnishes relevant information on various events. Revealingly, he criticised the followers of Proclus, including even the revered Marinus. Damascius accused these theurgists of lacking insight.

Damascius was especially critical of Hegias, a wealthy patron who became head of the Athenian school during the 490s. The factor of wealth is significant; affluence had ousted the “moderate asceticism” of Plotinus, instead permitting the influx of ritual preoccupations, to the extent that intellectual study was in jeopardy.

Damascius clearly wanted to change the situation, being in favour of restoring the contemplative angle as distinct from ritual distractions. Systematic study of Aristotle and Plato was a primary feature of his “revival.” He composed the treatise known as Problems and Solutions Concerning First Principles, providing a critique of the Proclean metaphysical system.

However, Damascius employed an Iamblichean mode of interpretation rather than anything Plotinian. He still tried to integrate the “Chaldean” theurgic doctrines into a Neoplatonist framework, nevertheless expressing a different standpoint to Proclus, with some critical attention to the arguments of Iamblichus.

Time was running out. In 529, paganism was prohibited by the oppressive Christian emperor Justinian the Great. Exile was threatened if the pagans did not convert to Christianity. Some victims lost their lives. In this grim situation, Damascius and six other learned Neoplatonists decided to flee from Athens, emigrating to Mesopotamia in an endeavour to gain a hearing at the Sassanian court in Ctesiphon. The details are not clear.

A recent theory posits that a Neoplatonist school was soon established at Harran (Hellenopolis) under Sassanian protection. Harran certainly became a subsequent centre for philosophical and scientific studies, in Greek and Syriac, during the early Islamic era.