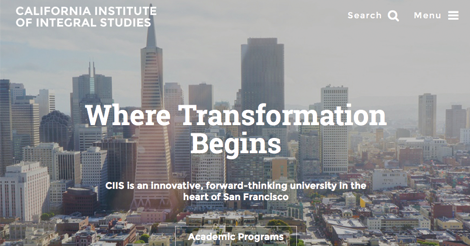 The subject of integral studies is associated with the Indian mystic Aurobindo Ghose, though substantially developed and elaborated by American enthusiasts. The idea of integralism originated in Aurobindo’s theme of “Integral Yoga,” favoured at Esalen. The concept was subsequently adopted, with various innovations, by exponents of transpersonal psychology.

Haridas Chaudhuri (1913-1975), a Bengali disciple of Aurobindo, became active and influential in America. He helped to establish the American Academy of Asian Studies, an alternative enterprise whose students included the two subsequent co-founders of the Esalen Institute (namely Michael Murphy and Richard Price).

In later years, Chaudhuri created the California Institute of Asian Studies, still strongly linked to Aurobindo teaching. After his death, in 1980 the name of that organisation was changed to the California Institute of Integral Studies (CIIS). This alteration is stated to signify the emerging globalism of outlook and a more extensive East-West synthesis. CIIS is a private institution in San Francisco.

CIIS advertises academic programmes, also dispensing degrees that include the PhD and MA. This mandate is regarded with acute reserve by many conventional university academics. There are also public CIIS programmes featuring a wide array of “workshops,” the activities including Yoga, “self-discovery,” “healing,” and numerous permutations. Alternative therapy here encompasses Integral Counselling. An ubiqitous theme is transformation.

Despite the promotionalism, strong criticisms have been lodged. Sceptics say that the “new age healing” orientation of CIIS is demonstrated by emphases on transformation, transpersonal psychology, psychotherapy, and innumerable related “workshop” creations associated with “new spirituality.” A formerly online Open Letter made the accusation: “It appears that at CIIS, faculty simply put on academic rank and titles similar to kindergartners donning academic regalia, with no need for actual promotion processes or scholarly achievement.”

CIIS is well known for “certificate programs in Psychedelic Research and Human Sexuality.” These are two of the most confusing subjects in contemporary jargon. The therapy-oriented nature of CIIS courses is one of the features visible in numerous online service reviews. While some of these reviews are positive, many express a negative judgment from firsthand experience. CIIS is notoriously expensive, charging over 10,000 dollars per semester. Critics describe many of the students as wealthy hobbyists not needing to graduate for a career. “Extremist ideologies” are part of a “diploma mill,” creating misinformation and miseducation. The administration is described as “dysfunctional and disorganised.” Overbearing tutors apply “therapy” evoking unpleasant trauma.  Some of the tutors are described as teaching psychedelics. Many students have sued CIIS professors. A review, dating to 2017, complains: “My daughter experienced rampant sexual harassment by a professor.”

A basic theme emerging is that CIIS represents “experiential classes” instead of academic learning. Much the same perspective applies to the Findhorn Foundation and other “transformation” venues. An ex-subscriber review of CIIS, dating to 2021, urges: “Avoid this institution at all costs. It is a miserable experience to matriculate, and an absolute nightmare to deal with the administration and the financial office.”

Probably the two most famous names to date on the CIIS faculty are Stanislav Grof and Richard Tarnas. Dr. Grof is known for his controversial holotropic theories and “cartography of the human psyche,” based upon his activities in LSD psychotherapy (Grof 2000). These interests extended into blatantly commercial operations via Grof Transpersonal Training Incorporated (Grof Therapy and MAPS). Profits do not prove accuracy.

Professor Tarnas, a Grof supporter, is another psychedelic theorist. His book on philosophy, The Passion of the Western Mind, includes a defence of Grof therapy. The eccentric dimensions of this vaunted “perinatal” theory have misled numerous psychedelic victims, who suffer, for instance, “the physical catharsis involved in reliving the birth trauma” (Tarnas 1996:427). Cf. Philosophy, Richard Tarnas, and Postmodernism.

The content of an East-West synthesis is in question. In some respects at least, CIIS has adopted the commercial Esalen model of “transformation.” That model misses out too much of the Western heritage, also bypassing Eastern philosophy to a very substantial extent. An online statement of CIIS referred to 25 academic programmes that “train healers and thought-leaders.” Popular workshop slogans are in evidence. “You are naturally already who you are.”

I have been asked what my own position is with regard to integral studies, in view of my citizen project of private research at Cambridge University Library (CUL) commencing in 1981. I will accordingly make some observations here.

My concept of intercultural and interdisciplinary study does not extend to “workshops” and therapy, which have been known to create serious confusion in the public mind, also amongst academics. Psychedelics are a major distraction which ruined education in many instances. My citizen version of anthropography, in the preliminary presentation Meaning in Anthropos (1991), adhered to annotation procedures of research and commentary. I do not claim any “integral vision,” currently a very popular interest needing correction.

I am allergic to buzz words like transformation. “Inner exploration” can too easily become a narcissistic “workshop” playground for predators and victims. Such labels were incessant catchphrases at the Findhorn Foundation during the 1990s. As a neighbouring outsider to that organisation (living in Forres, Scotland), I had the long-term opportunity to observe how the Foundation therapists and “focalisers” maintained the stigma and suppression of my mother. See Kate Thomas and the Findhorn Foundation. The elite (and supposedly transformed) Foundation leaders entertained presumptions to numerous abilities, such as holistic expertise, counselling, conflict resolution, love in action, unconditional love, the alchemy of peace, feminism and rights for contemporary women, sex therapy, attunement, empowerment, forgiveness, and the game of transformation. All this merely comprised the facade for commercial roles and delusions of grandeur.

Purported and lavishly advertised Integralism can very easily become Exclusivism, incapable of registering criticism for reasons that are extremely dubious.

Aurobindo can be absolved of any responsibility for the transmission of American counselling and transformation pretensions to Britain. Even during the 1980s, there was very little of his teaching visible in the entrepreneurial industry catering for a new age clientele. Integral Yoga was of limited usage for any commercial operation. However, Aurobindo themes for long remained a preferred jargon in some transpersonal circles. A complication is evident.  “He made an unfortunate prediction in The Life Divine about ‘a race of gnostic spiritual beings’ ” (Aurobindo and Esalen). The prediction confused Esalen “new spirituality.” Many new age supermen made their appearance in California and elsewhere. These inflated entities were supposedly transformed and frequently mercenary. “The ideal should be one of remaining ordinary and more diligent in scruple”  (Shepherd 2004:159).

One of the Esalen founders (Richard Price) discovered that the permissive ashram of Bhagwan Shree Rajneesh was far more ominous than he had been led to believe. This was in the late 1970s, when Esalen had become the breeding ground for so many fads and crazes. NeoReichian therapies could cause physical injuries, even while the deceptive presiding message was one of liberation and transformation. “Price himself is said to have suffered a broken arm while being locked up for an hour in a room with eight people armed with wooden weapons; even Esalen could become rational under severe stress” (Shepherd 2004:60).

The shocks and drawbacks could not prevent the integralist (and transpersonalist) Ken Wilber from eulogising the American gurus Adi Da Samraj and Andrew Cohen, entities who were viewed by critics as predatory (Perennial Philosophy). Wilber’s version of integral studies has come under fire from various critics and discontented former enthusiasts. Wilber claimed a virtual “integral omniscience” via his Quadrant Theory, while ignoring much professional research. Some relevant arguments are discussed at Ken Wilber and Integralism. Wilber commenced the Integral Institute, often regarded as a rival to CIIS (Wilber 2007).

My own format in Pointed Observations (2005) was substantially critical of the alternative trends represented by Jung, Grof, Wilber, Esalen, the Findhorn Foundation, and others. Some readers noticed that I preferred David Hume, Spinoza, and the vintage Club of Rome ecology to the contested trends. For many years I had been resistant to the sceptical philosophy of Hume (and still am in many basic respects). However, Hume was rational by comparison with problems of pseudo-transformation.

Grof, Stanislav, The Adventure of self-Discovery: Dimensions of Consciousness and New Perspectives in Psychotherapy and Inner Exploration (State University of New York Press, 1988).

Wilber, Ken, The Eye of the Spirit: An Integral Vision  for a World Gone Slightly Mad (Boston: Shambhala, 1997).