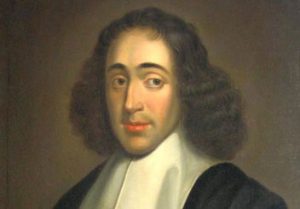 The preceding treatments of six philosophers encompass acutely different cultural backgrounds (entries 17-22). The first three were Muslim falasifa who related to the Aristotelian tradition in different formats. I am referring to al-Farabi, Ibn Sina, and Ibn Rushd (Averroes). The last three quite decisively separated from the Aristotelian conceptual heritage, represented in their time by the Christian Scholastic tradition. I am here referring to Francis Bacon, Descartes, and Spinoza.

There are complexities and significances in these varied transitions that are not always dwelt upon. The Islamic Aristotelian tradition differed from the Christian version, which became rooted in the exegesis of Thomas Aquinas (d.1274). This prominent theologian is associated with a perception that the Neoplatonist versions of Aristotle were not authentic, being later interpretations. However, Ibn Rushd had earlier grasped this complexity to a considerable extent; his relevant explanations are not cancelled out by the sequel.

A well known Cambridge analytical philosopher asserted: “The De Anima leads much more naturally to the view of Averroes than to that of Aquinas”  (Russell 2000:445).

The Christian Schoolmen imparted their own format to Aristotle. The question of authenticity tends to evaporate in the face of exegetical innovations imposed by religious beliefs. By the time of Francis Bacon and Descartes, the Late Scholastic tradition, existing in European universities, was a barrier to scientific discoveries of the type associated with Copernicus and Galileo.

Francis Bacon took a starkly empiricist attitude to the situation, anticipating scientific research institutes of a later time. Rene Descartes demonstrated a rationalist output moving between the empirical and deductive modes. Spinoza continued the innovative approach in a different way, his “artisan and private scholar” vocation being notable for a “substance monism” that has been variously interpreted, plus a political (and scriptural) exegesis that was startling for his time.

The diverse influences on Spinoza, varying from Descartes to Hispanic-Jewish Neoplatonism and Kabbalism, have defied constricting attempts at linear interpretation. Spinoza’s “pantheism” is not straightforward in any detailed analysis. For instance, “commentators have debated over the question of whether the immortality intended by Spinoza is personal or not” (Koistinen and Viljanen 2009:22). Spinoza certainly did state in the Ethics that “the human mind cannot be absolutely destroyed with the body, but something of it remains which is eternal” (Book V, proposition 23, E. Curley trans.).

Ironically perhaps, the Neoplatonist vein in Spinoza is not so far removed from Farabi as some appearances might suggest. Consider the following remarks by a leading specialist in Spinozan studies:

On the one hand, he [Spinoza] is making the most radical, daring move that had occurred in many a century and, on the other, he is obviously building on great ideas set forth most recently by Descartes and Hobbes and, to some extent, by ancient and medieval thinkers, especially of the Neoplatonic variety…. He had come to grips with Cartesianism and had moved beyond it. He had found Descartes’s dualistic metaphysics incompatible with the monism of a Neoplatonic view of the universe. (Popkin 2004:127)

The Aristotelian sciences had not been lost. They had achieved a further development. Spinoza escaped the confusing academic syllabus, instead grinding and polishing lenses for use in scientific instruments. Microscopes and telescopes were insignia of the Scientific Revolution. Spinoza was investigated by Christiaan Huygens, the wealthy astronomer and mathematician who achieved fame with the telescope.

In their own day, Spinoza was eclipsed in stature by the empirical Huygens, who gained recognition and fame as a scientist. In contrast, Spinoza was treated to stigma and misrepresentation by so much of the contemporary society influenced by standard religious thinking. Since that time however, the underdog has achieved a more pervasive status in the academic repertories. In some directions, Huygens is secondary to the deductivist rationalism. Further, there are now more books on Spinoza than his empiricist contemporary. However, the history of science gives a higher rating to Huygens as one of the major figures in the Scientific Revolution. Another conclusion is that the role of Huygens was obscured by the fame of Isaac Newton. We should therefore be grateful that both Spinoza and Huygens survived the interim period of relative oblivion.