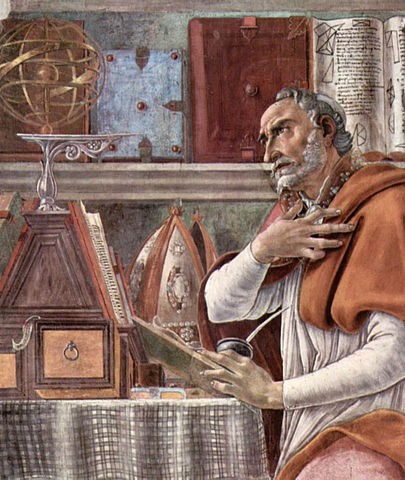 Augustine of Hippo, fresco by Botticelli
Augustine of Hippo (354-430) was a contemporary of Hypatia and the Patriarch Cyril. Originally a Manichaean, his conversion to Christianity was for many centuries regarded by clerics as a triumph over the supposed evil of dualism. The followers of Mani reaped violent opposition and infamy.

Augustine is sometimes described as a Christian philosopher. Bertrand Russell admitted him into a famous canon of Western philosophy, alongside Ambrose, Jerome, Aquinas, and others (Russell 1946:344ff). Augustine himself clearly viewed philosophy as having a secondary status to revelation. His outlook is complicated by the doctrine of predestination.

He was born in the Numidian town of Thagaste, in what later became Algeria. His middle class father was a pagan and his mother a Christian. At the age of seventeen he moved to Carthage, for further education in Latin literature; he acquired a long-term concubine and became a pedagogue in the classical mode. When he read Cicero’s Hortensius in 373, he was inspired by an exhortation to philosophy. However, he did not become a Stoic or a Platonist, but instead converted to the Manichaean religion, becoming a “Hearer” for about nine years.

Still a pagan, he moved to Italy in 383, becoming a professor of rhetoric at Milan. The preaching of Bishop Ambrose now caught his attention; Ambrose made borrowings from Plotinus in his sermons used for the episcopal cause. Circa 386, Augustine obtained some books on Neoplatonism which are known to have exercised a strong influence upon him; he understated this matter in his influential Confessions.

According to Peter Brown,  Augustine “seems to have deliberately dwarfed the number of the [Neoplatonist] books he had received and the time which he took to absorb them” (Brown 2000:94). Those books apparently included many treatises of Plotinus in a Latin translation by Victorinus. Augustine did not read Greek, and himself wrote in Latin. Certain deductions are relevant. The Confessions “were patently the work of a Neo-Platonic philosopher” (ibid:165). Yet “Plotinus never gossiped with the One as Augustine gossips in the Confessions” (ibid:167, citing E. R. Dodds in the Hibbert Jnl).

“The emotional tone of the Confessions strikes any modern reader” (ibid:170). In contrast, the Enneads of Plotinus present discursive themes, including very brief personal recollections of a unio mystica, in a language lacking emotional contours. There is no such event in Augustine’s autobiography. “Where Plotinus is full of quiet confidence, Augustine felt precarious” (ibid:178).

The Confessions is a document emphasising the triumph of Christianity, being composed after the author became a bishop. Some readers are critical of submerged factors and rhetorical flourishes. Augustine did not become a convert to Christianity until 386, and was baptised by Ambrose the following year. In 391 Augustine was ordained a priest at Hippo (near Thagaste), thereafter becoming a preacher and worsting the local Manichaeans. Four years later he became the bishop of Hippo. In this action he bypassed the routine of the monastery at Hippo associated with him; that monastery itself became increasingly ecclesiastical.

Augustine did not want a simple contemplative life but instead an officious role in church affairs. He daily arbitrated in lawsuits and vehemently campaigned against the rival Christian Donatists. The professor of rhetoric had become a Catholic missionary. Significantly, Bishop Augustine “decided that he would never reach the fulfilment that he first thought was promised to him by a Christian Platonism: he would never impose a victory of mind over body in himself, he would never achieve the rapt contemplation of the ideal philosopher” (Brown 2000:147).

The government increasingly imposed restrictions on the African Donatists. Augustine eventually agreed with other bishops that the imperial policy of coercion was justified. In 412, the Emperor Honorius proscribed Donatism, exiled Donatist clergy, and confiscated Donatist property. The Catholic cause was triumphant.

Augustine was  in conflict, not merely with Platonism, but with Roman aristocrats who assumed an intellectual superiority via their familiarity with classical heritages. In The City of God (De Civitate Dei), composed in his last years, Augustine opposed Roman paganism, then such a strong rival of Christianity.

Augustine was responding to the sack of Rome by the Goths in 410. More specifically, to a pagan argument that the disaster was due to abandoning the gods in favour of Christianity. Augustine retorted that the gods did not save Rome. The pagan gods gain the maligned stature of devils in Augustine’s version, failing to communicate any moral teaching. Obscenities in pagan rites are appropriately criticised. However, “the influence of Roman rhetoric… can be seen in almost every paragraph that he wrote, and in many an argument that he used” (J. O’Meara, intro. to The City of God, Bettenson trans., p. xxii).

The City of God awards deference to Plato, and secondarily to Aristotle. These philosophers are nevertheless criticised  for endorsing the gods. The Platonists were the pagans nearest to Christianity, Augustine approvingly asserted; Plotinus here benefited from the association with Plato. However, the Platonists are rebuked for refusing to acknowledge Christ, who here denotes the universal route to salvation. Porphyry shares in this denunciation, though the disciple of Plotinus is praised for his opposition to theurgy, as relayed in the Letter to Anebo – “in which, while appearing to ask for advice and information, he exposes this blasphemous art of magic and overthrows it” (The City of God, Bettenson trans, p. 386).

Augustine cited the Neoplatonist contention: “No doctrine has yet been established to form the teaching of a philosophical sect, which offers a universal way for the liberation of the soul” (ibid:421). In contrast, Augustine’s doctrine was declaredly universal, and did not tolerate objections; for example, Porphyry’s belief in reincarnation was opposed.

The dogmatism of Augustine was demonstrated in his unrelenting attack on Pelagius and the latter’s supporters. He employed his rhetorical skills and episcopal position to achieve condemnation of the victims as heretics. Pelagius was a Christian from Britain, appearing in Rome during the late fourth century, gaining repute as an ascetic and moral reformer. Pelagius dismissed the doctrine of original sin and taught freewill, believing that individual moral effort produced virtue. This outlook conflicted with Augustine’s version of the doctrine of grace. Pelagius believed that Augustine had distorted this theme by creating a dogma of predestination.

Augustine’s determination to destroy his opponent and all that he stood for hardened into an obsession…. it was he [Augustine] who continued the witch-hunt into the far corners of the Empire by ensuring that there would be no area of the Church in which Pelagius and his friends might be able to find asylum. (Rees  1988:130)

Augustine has been considered a harbinger of the medieval Inquisition. He insisted upon the doctrine of predestination,  related to the concept of Adam’s original sin. In his view, baptised Christians were the elect, while all other humans were damned by God’s choice. “We are left with the harsh but seemingly inescapable conclusion that they [the non-elect] are not recipients of God’s mercy and so are condemned to eternal damnation for a sin which they did not themselves commit but of which, nevertheless, they are held to be guilty, a conclusion which Augustine’s remorseless logic does not permit him to mitigate even for children dying unbaptised” (Rees 1988:41).

This theological contrivance facilitated the concept of everlasting torment in hell. The dogma of the damned was employed as justification for the torture and burning of innumerable heretics from the twelfth century onwards, a trend culminating in the Spanish Inquisition, which targeted Muslims and Jews. Barbarian Europe lasted for a very long time.