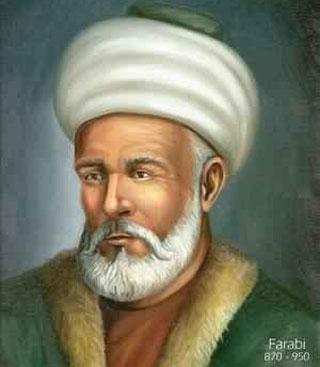 Abu Nasr al-Farabi (ca. 870-950 CE) was born in Central Asia. Two separate locations are mentioned in the contradictory (and frequently legendary) sources. His birthplace is said to be either in Farab on the Syr Darya river, or in Faryab (in modern Afghanistan). His ethnic origin has been in dispute. “Of Farabi’s life we know only that he came from Farab in Transoxiana and that his father was a captain of Persian, or probably Turkish, origin” (Fakhry 1983:107). Cf. Fakhry 2002:6, stating: “He is is said to have been a native of Farab in Transoxiana and of Turkish or Turkoman origin.” Cf. Mahdi 1971:523, deducing that his grandfather may have been a pagan convert to Islam; his father is said to have been an army officer of noble Persian descent, apparently in the service of the Samanid amirs. However, the family almost certainly spoke Sogdian or a Turkic dialect and exhibited Turkish manners and habits of dress (ibid). More recent commentary strongly indicates a Persian background (Rudolph 2016:536ff).

As a young man, Farabi  migrated west to Baghdad, then a primary centre of learning which attracted numerous bibliophiles and scholars. Europe was at that time a primitive backwater by comparison.

In Baghdad, Farabi acquired a wide knowledge of Greek philosophical texts; he apparently did not know Greek. His teacher was the Syriac-speaking Nestorian Christian logician (and cleric) Yuhanna ibn Haylan (died between 908 and 932). At this period, “almost the entire Greek philosophical and scientific corpus that had survived in the Eastern Mediterranean and the Near East was translated upon demand into Arabic” (Dimitri Gutas, Alfarabi).  Farabi became an editor of Arabic translations from Greek; his expertise in logic and the sciences strongly reflects Aristotelian themes. He also acknowledges Plato as a forerunner. He eventually became known in Islam as the “second teacher” (al-muallim al-thani) after Aristotle.