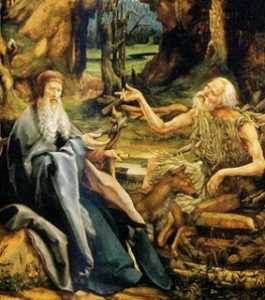 Antony and Paul of Thebes, Isenheim Altarpiece c. 1500
The early Christian phenomenon known as the “Desert Fathers” is of interest outside the theological domain. Commonly misunderstood, and also still widely neglected, this subject will not be unlocked by the contemporary indifference to “monks,” a category fitting very different psychologies and lifestyles.
The earliest Christian monks did not resemble the medieval varieties, especially those in European countries. The Desert Fathers, basically meaning Coptic (and Greek) ascetics of Graeco-Roman Egypt, were frequently anchorites in the early phase, retreating from the persecutions inflicted by the Roman regime. A major ideological influence was Origen, active at Alexandria in the early third century CE. Some (or perhaps many) ascetics similarly came from an urban background, likewise possessing a strong degree of literacy.
The Greek word monachos later became the standardised description for all types of monk, including many destitute peasants of the fourth century CE, when the monasteries proliferated in Egypt. By that time, earlier figures were becoming legendised, especially Antony, the subject of a hagiography composed by the bishop Athanasius. “The legacy at hand for anyone who like Antony, at the turn [end] of the third century, retreated from the duties of social life for the life of a philosopher, was not what, half a century later, a bishop like Athanasius wanted his flock to be fed with” (Rubenson 1995:125).
The distinction is vital between what came before and what followed after. The subsequent phase was increasingly manipulated by the Christian clerics, who sought to outlaw Origenism and other teachings which became maligned as heresies. Athanasius (c.298-373) was a major factor in the trend to orthodoxy. This bishop of Alexandria sought to create a unified Egyptian church within the Roman Empire, making the monks subservient to his scheme of organisation and doctrine. The simplified concepts attending “monasticism” became a vehicle of episcopal mandate. 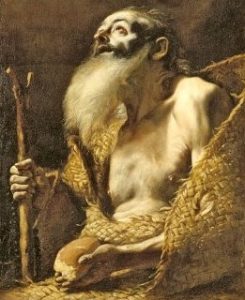 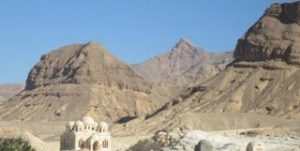 Coptic monastery of St. Antony, Egypt
Antony was born in Middle (or Lower) Egypt, and is also associated with Mount Kolzim, near the Red Sea, where he reputedly lived in a cave. To the south, in the Thebaid, a strongly contrasting form of monasticism emerged, being communal (coenobitic) rather than anchoritic. The coenobitic model eventually became the standard for Christian monasticism, a situation in which the earlier hermit life was eclipsed.
The reputed founder of the coenobitic lifestyle was Pakhom (292-346), whose career also became legendary. Born a pagan Copt, he was baptised as a Christian. Pakhom initially lived as an anchorite on the banks of the Nile, being the disciple of an obscure hermit named Palamon. At the deserted village of Tabennesis, Pakhom established a community of monks, which eventually harboured a hundred inmates. His community flourished, and by the time of his death, there were nine monasteries under his direction. Manual labour was a strong feature of the coenobitic lifestyle.
“Most Pachomian monks were Coptic speaking peasants, but several brothers clearly belonged to the Graeco-Roman elite” (Elm 1994:289). There were also two Pachomian monasteries for nuns, many inmates being the sisters, wives, mothers, and daughters of the monks. The discipline became codified into a formal Rule, committed to writing at an uncertain date.
There are strong indications that Pakhom resisted clerical interference, avoiding ordination. In his monasteries, ordination was regarded as a source of pride and jealousy. The ego inflation caused by clerical status was despised. In 345, a disapproving episcopal synod placed Pakhom on trial at Latopolis; he escaped during a riot. After his death, the practice of appointing monks to bishoprics became widespread by the fifth century.
The Pachomian communities adapted to clerical orthodoxy. A rival grouping was eclipsed by episcopal strategies. The Melitian schism  produced a separate church in Egypt, primarily Coptic, which found supporters amongst Coptic ascetics (Barnard 1973). The Melitian monasticism was “mainly located in or very close to villages and towns” (Elm 1994:345), and like the Pachomian model, was engaged in agricultural work and trade. The Melitian church also evolved a clerical hierarchy by 334 CE; they were effectively rivals to Athanasius, who regarded them as heretics.
Complexities in events included the participation of women, meaning the Christian virgins who appeared in the third century, particularly at Alexandria. They were noted for religious study; this trend attracted literate young women from a wealthy background. A modern scholarly description for this development is “academic Christianity.” Bishop Athanasius resisted innovations, wishing to impose clerical authority upon the monastic movement. “Athanasius’ effort to separate virgins from the discourse of academic Christianity thus involved intensive censorship of the virgin’s speech and hearing” (Brakke 1995:72).
The clerical manipulators maintained their cordon in subsequent generations. Bishop Augustine enlisted the support of Jerome against the dissident Pelagius, who was ousted from the contemporary scene as a heretic. Pelagius is associated with the monastic movement; he was not encumbered by the clerical appetite for ritual and predestination dogma.
Bibliography:
Barnard, L. W., “Athanasius and the Melitian Schism in Egypt,” Journal of Egyptian Archaeology (1973) 59:181-189.
Brakke, David, Athanasius and the Politics of Asceticism (Oxford University Press, 1995).
——–Demons and the Making of the Monk: Spiritual Combat in Early Christianity (Harvard University Press, 2006).
Burton-Christie, Douglas, The Word in the Desert (Oxford University Press, 1993).
Conrad, Jeffrey, Egyptian and Syrian Asceticism in Late Antiquity (2015, online at syriacstudies.com).
Elm, Susanna, Virgins of God: The Making of Asceticism in Late Antiquity (Oxford University Press, 1994).
Goehring, James E., The Letter of Ammon and Pachomian Monasticism (Berlin: Gruyter, 1986).
——–Ascetics, Society, and the Desert: Studies in Early Egyptian Monasticism (Trinity Press, 1999).
Harmless, William, Desert Christians (Oxford University Press, 2004).
Rousseau, Philip, Pachomius: The Making of a Community in Fourth Century Egypt (University of California Press, 1985).
Rubenson, Samuel, The Letters of St. Antony (Minneapolis: Fortress Press, 1995).
Kevin R. D. Shepherd
ENTRY no. 48
Copyright © 2012 Kevin R. D. Shepherd. All Rights Reserved.