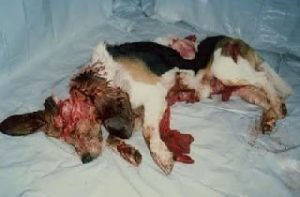 In a perfect society, the subject of animal ethics would not need to be urged. In the flawed reality of imperfect and corrupt society, the deficiency is  stunning.
A well known observation indicates that America and Japan are the two worst offenders in the field of laboratory animal abuse. The exploitive capitalism of America is reputedly the most extreme in this respect. “One animal dies in a laboratory in the USA every second, in Japan every two seconds, and in the UK every twelve seconds.” (LCA) An update for the UK is that one animal dies every eight seconds in British laboratories, where approximately four million animals are annually subject to experiments. Catching up with major culprits is not an exemplary code of practice. There are too many other offending countries upholding the bad habits induced by unscrupulous “science.”
Air France became notorious for annually transporting tens of thousands of primates for cruelty lab experiments. Air France is now the only major airline in the world that still conveys thousands of monkeys to ghastly deaths in American laboratories (25 Reasons You Should Never Fly Air France). American scientists are amongst the most insensitive personnel in the world. The “experimenters” (or torturers)  excuse their crimes to obtain further money.  Some critics urge that all those involved in “experiment” crimes should be administered a retribution they will not forget. A stronger suggestion is that Air France directors, Asian breeders, and American lab personnel should vicariously travel in small locked crates for many hours before having their heads drilled prior to premature death. This is understating the abominable fate of lab monkeys sent to the compromised “land of liberty.”
The insistence that animal experiments furthered a knowledge of physiology was strong in nineteenth century Britain, endorsed by the biology hero Charles Darwin. The National Anti-Vivisection Society of London, founded in 1875, faced a struggle against hideous cruelties. Today, the laboratory crimes are far more intensive, accompanied by facile arguments about the necessity for finding cures to diseases like cancer. Critics have developed strong counter-arguments, revealing the horrors as being not merely unethical, but also unnecessary, profit-seeking, and criminal.
The worst case scenario of laboratory animals is comparable to that of a human invalid in a hospital bed who is mercilessly tortured by doctors in attendance. Companies which breed laboratory animals are the ultimate in degradation of scruple.  The Laboratory Corporation of America ranks high on the list of predators. Now well known are the numerous violations of the Animal welfare Act relating to the years 2015-17. The Covance laboratories of LabCorp were here at issue.

Vivisection is a symptom of predatory “science” from America to China and Japan. Many millions of dogs, cats, rabbits, rodents, and other breeds are currently lab victims. Even horses, cows, sheep, pigs, fish, and birds suffer in the torture zone of laboratories.
In a global sense, the laboratory exploitation of animals is inseparably related to big business concerns, including animal dealers who traffic in primates and other unfortunate creatures. The pharmaceutical industry is notorious for a vested interest in animal testing. Primitive commerce still uses animals to test many substances, including cosmetics and cleaning agents.
The products of blacklisted commercial companies should be avoided. Billionaire industries are too frequently vampires. Many brands deny animal testing on their part; however, others have been reluctant to change their habits. Asian laboratories are especially notorious; in some countries, there is no law controlling animal testing. Cosmetic experiments on live animals are a horror story. In 2013, an EU ban on animal cosmetic testing occurred, although certain problems are still in evidence.
The British public must develop far more caution about health charities seeking donations. The web has mediated such informed statements as: “Public donations are used by charities to fund experiments in which animals have cancers grown on their backs, have limbs broken, and are left crippled.” That is the case for survivors; most victims die in agony. Never donate to a charity unless you know exactly what they do behind the scenes. The word charity can represent an acute anomaly.
There are said to be almost twice as many health charities which do not fund animal experiments, as those which do. Some of the largest health charities in the UK are notorious for conducting cruel animal experiments. For instance, Cancer Research UK and the British Heart Foundation are controversial. The mandate of medical progress at the cost of animal suffering is one that can arouse strong opposition. The vivisection advocates act as though opposition to them is irresponsible, and guilty of delaying progress. Analysis of progress is not always inspiring. For instance, the Alzheimer’s Society funded repugnant brain injury experiments on mice at Edinburgh University. Critics say that such research is futile and a waste of funds. Yet in 2011, an Edinburgh researcher received, from the same charity, a grant of £335,000 to brain damage mice for a further three years. These details, and many more, became well known online.
An emerging contention, amongst critics of vivisection, is this: the differences between human and animal species are so substantial that research relying upon animal data is very largely, or completely, useless. The encumbrance serves to attract grant money from bungling institutions not in effective contact with truly progressive science.
Many thought-provoking statements can be found in the critical literature. “For example, researchers have ‘proven’ in animals that cigarettes both do and do not cause cancer – depending on the funding source” (formerly online at vivsectioninfo.org/faq). Corrupt commercial avenues are very misleading.
Testimony to the depraved nature of animal experiments is abundant. For instance, “to study the results of head trauma, primates were strapped into machinery to receive high-impact blows to the head. A video camera captured footage of vivisectionists taunting the injured animals, who were left with severe brain damage.” This situation reveals the barbarous state of “education” existing at the University of Pennsylvania during the 1980s.
Today, there are  millions of suffering animals trapped in British laboratories, a situation permitted by gravely flawed protocol (and highly paid bureaucrats). The situation in America has provided an adverse reflection upon the so-called greatest civilisation ever known. “Every year, tens of millions of animals are dissected, infected, injected, gassed, burned and blinded in hidden laboratories on college campuses and research facilities throughout the U.S.” (formerly online at vivisectioninfo.org).
A number of American universities were fined for violating the Animal Welfare Act. In 2005, the University of California (San Francisco) was charged with 59 (or 75) violations of the Animal Welfare Act; these events occurred  in their  laboratories. Denying many of the charges, the University of California paid a fine of over 90,000 dollars (Animal Ethics). Critics say that this abusing institution was far too lightly penalised.
In 2007, the US Department of Agriculture (USDA) reported over 17,000 nationwide violations of the Animal Welfare Act, affecting an estimated half a million animals. This statistic does not include innumerable mice, rats, and birds, who are not even covered by the deficient laws. USDA were the agency responsible for the monitoring of laboratories. In 2010, USDA reported that over 97,000 animals endured laboratory-inflicted pain without the benefit of any pain-relieving drugs. Again, the vast numbers of abused mice, rats, and birds were not included in this revealing assessment (reported by In Defense of Animals USA).
America is a laboratory predator of staggering proportions. Billions of dollars have been annually allocated to fund useless and sadistic animal experiments via the National Institutes of Health. The insensitivity of bureaucrats and vivisectors is testimony to the low level of current “civilisation” or “republic.”
As to the comparatively rare responsible research, this is something quite different to animal experiments. The so-called “scientific revolution” is in the future, not in the past. The full potential of new technologies “can never be realised while dependence on animal models persists.” A basic factor is:

Reliance on [abused] animals continues, not because it is effective, but due to inertia, lack of training, vested financial interests, and adherence to outdated traditions. (formerly online at idausa.org/campaigns/responsible-research)

In Britain, public complaints prevented Cambridge University from building a massive primate testing centre. During the 1990s, the same university was revealed to be in collaboration with an unscrupulous biotechnology company. The controversial laboratories called Huntingdon Life Sciences favoured the abomination known as xenotransplantation. This lunacy meant that hearts and kidneys from genetically engineered pigs were transplanted into the necks, abdomens and chests of monkeys and baboons.  Such laboratories are totally insensitive to the sufferings they cause, while wasting funds in useless pursuits. The drawback  is a symptom of retrogressive commercial enterprise in the guise of scientific panacea.
Kevin R. D. Shepherd
July 2013 (modified 2021)
ENTRY no. 54
Copyright © 2021 Kevin R. D. Shepherd. All Rights Reserved.