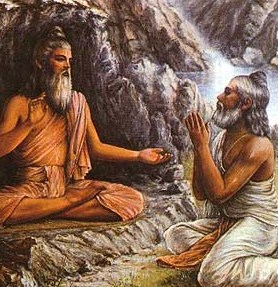 The texts known as Upanishads are traditionally described in terms of jnana-marga, the path of knowledge. Jnana is strongly associated with the ongoing tradition of Vedanta, one of the celebrated six schools of Indian philosophy. The classical Upanishads became known as Vedanta, meaning the end of the Veda. The word Vedanta “was understood to mean not just the end but also the summit and crown of the Veda” (Olivelle 1992:3). These books received later commentaries from medieval exponents like Shankara.
The classical Upanishads are much earlier than the monastic organisations created by medieval Vedanta. Those texts are difficult to date, and assessments of chronology have varied markedly. The oldest Upanishads were pre-Buddhist, but many were later in time. Radhakrishnan favoured a date of 900-600 BC for the earliest of these texts, with Western scholarship tending to reduce the time scale.
Jnana-marga is often distinguished from karma-marga, meaning the path of ritual action, represented by earlier texts of the Vedic corpus. All these texts were composed in North India, and preserved by the brahmanical caste. However, different influences and temperaments are represented. The early Upanishads feature monism, and also refer to transmigration.
The Brihadaranyaka and Chandogya are prose Upanishads, and are thought to be the earliest in the series. These texts were edited, and some components employed may be considerably older. As with later Upanishads, they are not books presenting any philosophical system. A flexibility in approach to the materials is necessary.
While some Western scholars discerned in the Upanishads a spirit of revolt against priestly ritualism, other Indologists (notably Renou) muted this factor in a context of priestly supplements to the earlier Brahmana literature. Different angles can be followed here. According to Louis Renou, “Vedism became debased to the level of crude witchcraft owing to magical ideas which left their mark on the Brahmanas, to the extent that one of these texts is given up to magic, as with part of the Atharva Veda” (Shepherd 1995:552).
The diverse categories of Vedic text can easily cause confusion. The early Samhitas are collections of verses, including the famous Rig Veda corpus of over a thousand hymns (Gonda 1963). The authors of these hymns are often known as rishis, a word denoting seers. “The Rig Veda is a prime case of an anthology. Some of the hymns in this anthology were accessory to the priestly liturgy, but some are entirely secular in tone” (Shepherd 1995:494). The Rig Veda is not a ritual text, despite some strong associations with brahmanical ceremony. The contrasting Brahmanas are prose texts featuring explanations of the liturgy.
The Brahmanas include “esoteric material explaining the hidden meanings of ritual actions and words; some of these esoteric sections… came to be called Aranyakas (texts that were to be recited in the wilderness outside the village), while others came to be called Upanishads” (Olivelle 1996:xxxii).
“Cosmological and metaphysical topics generally occupy a more central position in the Upanishads, however, than in the Aranyakas, and the Upanishads are, by and large, later than the Aranyakas” (ibid). The Upanishads were not written down “for perhaps a thousand years” (ibid). Meanwhile, many cultural and social transitions occurred, including an increased rigidity of the caste system (Jha 1975). The competition with Buddhism became pronounced.
According to the Sanskrit scholar Jan Gonda, the Rig Veda, the Brahmanas, the Aranyakas, and the earliest Upanishads must have existed (at least for the greater part) in their present form prior to the rise of Buddhism (Gonda 1975:20). The dating for the formation of Rig components has varied considerably.

The aphoristic nature of Upanishadic composition has caused Western analysts to complain of the lack of any systematic philosophy…. The classical Upanishads… are fond of riddles and enigmatic expressions, and the doctrines of various sages are apt to be condensed into a single sentence. Brahmavidya (knowledge of Brahman) or jnana is depicted as being vastly superior to sacrificial etiquette, and realisation of that knowledge is duly stressed. This objective is inseparable from the aid of a teacher, and is related to tapasya or ascetic discipline. A strict discipline was clearly envisaged, and in some texts it is stated that only brahmans are eligible. The prerequisite for discipleship was evidently a high moral standard, one necessary to maintain a rigorous self-discipline. Meditation is emphasised, but there are many different formats referred to…. The end product of the discipline was the jivanmukta (a standard term in the later Upanishads), i.e., the soul gaining spiritual liberation while still living in the body. (Shepherd 1995:547-548)

A group of early verse Upanishads include the Katha, dating to the late first millennium BC. These works are noted for featuring strong theistic tendencies, and thus anticipating the Bhagavad Gita, claimed by the Vedanta as a basic scripture. The Katha includes a dialogue between the young brahman Nachiketas and Yama, the god of death. The former asks to be told the secret of death, in a spirit of renouncing the distractions of mortal life.
Yama then gives advice concerning knowledge of the atman and Brahman. One verse has been translated as: “The truth of the Self cannot be fully understood when taught by an ignorant man, for opinions regarding it, not founded in knowledge, vary one from another. Subtler than the subtlest is this Self [atman], and beyond all logic. Taught by a teacher who knows the Self and Brahman as one, a man leaves vain theory behind and attains to truth” (Prabhavananda 1957:17).
The same text emphasises the difficulty of the achievement involved. “Like the sharp edge of a razor, the sages say, is the path” (ibid:20). Numerous commercial attempts to simplify these matters have occurred during recent decades, and may count as further distractions.
The Maha-Narayana Upanishad is thought to have been composed during the third or fourth centuries BC. This is a manual for ascetics employing many quotations from older works (Varenne 1960). The text can be interpreted as an attempt to harmonise the ascetic and ritual lifestyles, and thereby facilitating the tendency in brahmanical society to assimilate the numerous ascetics and hermits (Gonda 1970:29).
A number of the texts in this corpus are known as Sannyasa Upanishads, indicative of their background context in renunciation. Some of these were apparently composed before the third century CE, but others are many centuries later. The term paramahamsa is employed to describe an advanced grade of renouncer. The various classifications indicate an original diversity of ascetic lifestyles that were subsequently conflated into the institution of sannyasa by brahmanical theology (Olivelle 1992:98,100).

The Sannyasa Upanishads convey a graphic picture of ascetic tendencies from an early period. A life in the wilderness contrasted strongly with the ritual lifestyle of the householder maintained in the villages. Ascetics spent their nights in deserted houses, in temples, on haystacks, near anthills, under trees, in the humble sheds of potters, in mountain caves, in open fields, and yet other places. Mendicancy was a basic facet of lifestyle, and nudity was highly regarded by some as a sign of renunciation. However, other ascetics preferred to wear a loincloth or an ochre garment (ibid:103,106). The outlook in this sector included a desire to be despised rather than praised; the purpose was to overcome pride (ibid:108). Some texts advocate disguise, so that the ascetic would not be recognised as a holy man (ibid:107).
In a basically copyist idiom, many texts appeared in later centuries with the title of Upanishad. Sectarian commitments are frequently in evidence, meaning primarily the division between followers of Vishnu and Shiva. “Such Upanishads continued to be produced possibly as late as the sixteenth century CE and number in the hundreds” (Olivelle 1996:xxxiii).
During the medieval period, a trend developed of forming into collections both the earlier and later Upanishads. This meant that the early Upanishads were detached from the Brahmana literature. European analysts subsequently complained that scholarly distinctions were lost in this tendency to conflation. A favoured number in North India was 52, reflected in the corpus translated into Persian at the instruction of the Mughal prince Dara Shikoh during the seventeenth century (Hasrat 1982). That collection underwent exegetical changes in the interpretation of Schopenhauer (d.1860).
Bibliography:
Gambhirananda, Swami, trans., Eight Upanishads, with the commentary of Sankaracharya (2 vols, 1957; second edn, Calcutta: Advaita Ashrama, 1989).
Gonda, Jan, The Vision of the Vedic Poets (The Hague: Mouton, 1963).
——–Visnuism and Sivaism (London: Athlone Press, 1970).
——–Vedic Literature (Wiesbaden: Harrassowitz, 1975).
Hasrat, Bikrama Jit, Dara Shikuh: Life and Works (second edn, New Delhi: Manoharlal, 1982).
Jha, V., “Stages in the History of Untouchables,” Indian Historical Review (1975) 2:14-31.
Olivelle, Patrick, Samnyasa Upanishads: Hindu Scriptures on Asceticism and Renunciation (Oxford University Press, 1992).
——–trans., Upanishads (Oxford University Press, 1996).
Prabhavananda, Swami, and Manchester, Frederick, trans., The Upanishads: Breath of the Eternal (Vedanta Society of Southern California, 1957).
Radhakrishnan, Sarvepalli, The Principal Upanishads (London: Allen and Unwin, 1953).
Renou, Louis, Religions of Ancient India (London: Athlone Press, 1953).
——-Vedic India, trans. P. Spratt (Calcutta: Susil Gupta, 1957).
Shepherd, Kevin R. D., Minds and Sociocultures Vol. One: Zoroastrianism and the Indian Religions (Cambridge: Philosophical Press, 1995).
Varenne, Jean, trans., La Maha Narayana Upanishad (2 vols, Paris: Editions De Boccard, 1960).
Kevin R. D. Shepherd