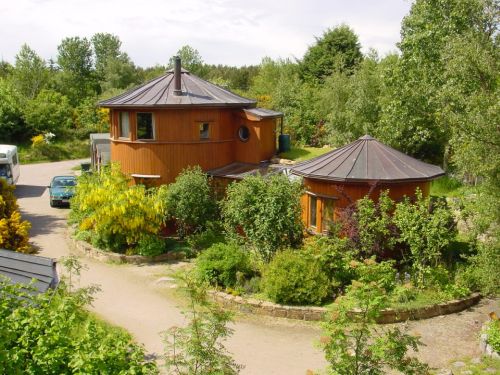 The major centre for “alternative thought” in Britain is the Findhorn Foundation, located in Moray, north Scotland. Commencing on a caravan site in 1962, the Foundation developed a workshop programme associated with the Human Potential Movement (HPM) in California. More specifically, the Esalen Institute was founded the same year, becoming the commercial hub of that disputed trend.

At the Findhorn Foundation, in 2006, an extension via CIFAL auspices occurred, denoting an ambiguous role in the UN ecology programme (Critique of CIFAL Findhorn). CIFAL Scotland Ltd was an adventure in company status, dissolved in 2018, after supplying ballast for other commercial projects at the Findhorn Foundation. CIFAL Scotland Ltd was formerly CIFAL Findhorn Ltd during the years 2006-2011. Numerous confusions were caused by this CIFAL business activity, which served to validate Foundation alternative therapy and to shield against criticism of dubious trends.

The Findhorn Foundation has made several disputed claims over the years, including that of dispensing a spiritual education. One of the numerous phrases in use after 2000 was “a centre of spiritual service in co-creation with nature.” Critics objected to the rather extravagant wordings. The phrase “personal and spiritual transformation” was also favoured, a lucrative theme too common in the alternative sector of capitalism. The word “holistic” was typically in fashion, though ultimately meaningless. Amongst the commercial promotions is “The Game of Transformation,” a pseudo-holistic novelty commencing in 1978, for which the participant charges were consistently high. An additional market detail is that a million decks of “Angel Cards” were sold by 2003.

By the year 2000, the Ecovillage project was underway, much deference being awarded to the concept of sustainability (also sold in “workshops”). Twenty years later, the ideal is to sell an “eco-house” for £300,000. For a different perspective, see Climate Danger and COP26.

The scope of ecology is impaired by sales drive. A focus of disagreement is the general ideological and sales context of the Findhorn Foundation, onto which the ecology interest was grafted (Myth and Reality). The influential “Experience Week,” carrying heavy price tags, has for long comprised the introduction for beginners, encouraging interest in commercial workshops also provided by the annual programme. The affluent international clientele has numbered many Americans and Germans, with other nationalities also being represented. The major attraction is alternative therapy.

Over many years, the Foundation promotional literature (and online extension) has sustained a strong clientele attraction in “workshops” selling at high prices (Ecobiz and Commercial Mysticism). These activities demonstrated an underlying influence of the Esalen model from the 1970s onwards. The concepts involved were largely rooted in the field of alternative therapy, generally imported from America. A major manifestation of that trend occurred with the instance of Holotropic Breathwork (HB), a creation of the psychedelic entrepreneur Stanislav Grof during his Esalen phase (1973-1987).

Expensive HB workshops were conducted at the Foundation during the years 1989-1993, under the auspices of Grof Transpersonal Training Inc. Despite the glorifying promotionalism, some paying clients experienced mishaps and problems that were suppressed. HB therapy was administered in the belief that spiritual benefits were occurring. HB workshops notably featured prolonged hyperventilation, to the accompaniment of “bodywork” and music. A common response of participants was screaming; there were also various other extreme manifestations of behaviour, such as vomiting and trauma.

Grof lore was not questioned by the Foundation personnel who sponsored the commercial HB workshops. Complaints of victims and local critics were viewed as a threat to the proclaimed Foundation mandate of being a “planetary village” and a leader in “raising consciousness.”

The Foundation management were obliged to suspend HB workshops after five years of this activity. The Scottish Charities Office made a recommendation to that effect, after commissioning a professional report from the Pathology Department of Edinburgh University. The report gave warning, in medical terms, about the hazardous nature of the controversial HB activity.

No error was acknowledged by the Foundation staff. Instead, they censored and stigmatised a local British dissident who had legitimately complained at the discrepancies in clear evidence. That dissident was my mother, so I am well acquainted with the relevant details (see Kate Thomas and the Findhorn Foundation, also Letter of Kate Thomas to UNESCO).

In 1996, a book was published locally (in Forres) that documented the fate of several dissidents. The Foundation responded by suppressing the book to a notable degree. Staff members ignored the contents. In 2002, the prohibited work was declared on the internet as being not worthy of a review. The Foundation management instigated this questionable development, seeking to deny favourable reviews appearing in more responsible quarters (including International Cultic Studies Association). The book was entitled Hypocrisy and Dissent within the Findhorn Foundation. The British author was ex-member Stephen J. Castro. Amongst other matters, Castro documented the problematic phase of Holotropic Breathwork, which was so conveniently forgotten by the management (see Findhorn Foundation: Problems).

The “love and healing” tactic of the Findhorn Foundation was superficial in the estimation of critics. Facile partisan doctrine conveniently portrayed all criticism as being a purely subjective matter, a mere projection of the critic’s own mind. Alternative therapy ignored criticism and dissidents, instead giving lip service to the meaningless theme of “conflict resolution.”

Observers noticed that, for many years, the American “channelled” book known as A Course in Miracles was conspicuous in the activities of Cluny Hill College, the Foundation therapy centre in Forres. A major sentiment was forgiveness, which never applied to dissidents. “Unconditional love” was another of the superficial slogans in circulation.

Subscribers to this curriculum were known to read books by Ken Wilber, Stanislav Grof, and other popular “alternative” figureheads. The general partisan consumption was sated with numerous fads and doubtful menus varying from Aleister Crowley magic to the discourses of Bhagwan Shree Rajneesh. The Foundation bookshop was criticised by a female dissident who was not permitted to gain any democratic hearing.

The Findhorn Foundation College arose from the decline of Cluny Hill College, which suffered diverse vicissitudes at the time of severe economic debts incurred by the Foundation in the late 1990s. The experiment known as FCIE (Findhorn College of International Education) was disastrous, quickly terminating after enrolled American students rebelled at the curriculum in 1996. Such events can only be found in critical literature.

The major female dissident eventually commenced a solicitor confrontation with the Foundation in 2008. This episode has been documented online. The responses of the Foundation management have been widely considered deficient, to an extreme degree (Letter to Robert Walter MP, 2008). The management even attempted to deny the membership record of the dissident (Jean Shepherd, alias Kate Thomas), a ruse which was unsuccessful (Denial of Membership). Alternative “spiritual” education remains a suspect factor.