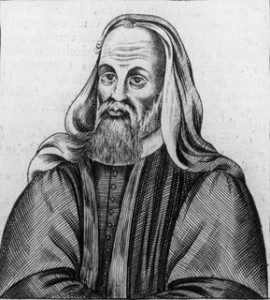 Depiction of Pelagius
The moral right of Pelagius to a fair hearing should be asserted, despite the shadow cast by Augustine of Hippo. The former was pushed off the ideological map by the latter. Indeed, Augustine composed fifteen anti-Pelagian treatises. An antique  Calvinist print (above) supplies an imaginary depiction of Pelagius, along with  hostile  emphases influenced by orthodox stigmas.
Pelagius was born in Britain at circa 350/360 CE. “He seems to have been one of the earliest, if not the very earliest, of that remarkable series of men who issued from the monasteries of Scotland and Ireland, and carried back to the Continent in a purified form the religion they had received from it” (quote from Pelagius). Augustine and Jerome referred to Pelagius as a monk, a description which has been questioned. He was the first known British author. Some of his themes reflected Greek thought, more especially Stoic traditions. Pelagius emphasised that man has free will.
His early life is very obscure. Different assessments have ascribed his move to Rome as dating to the 380s or circa 405. In Rome, Pelagius gained profile as an ascetic and moral reformer; he was well read and composed a commentary on the Pauline Epistle to the Romans. Pelagius denied any hereditary transmission of sin devolving from the fall of Adam; instead, he maintained that sin was caused solely by wrong choices and voluntary will.
Shortly before the invasion of Rome by the Goths in 410, Pelagius moved to Sicily and Carthage, finally settling at Palestine. He lived in relative peace until 415, when Augustine sent two letters (via a Spanish priest named Orosius) warning Jerome against him. By 417, Pelagianism had become an obsession for Jerome. “All the eloquence and violence of his invective were now aimed at these pestilential Pelagians and especially at the man whom he believed to be their leader” (Rees 1988:17). 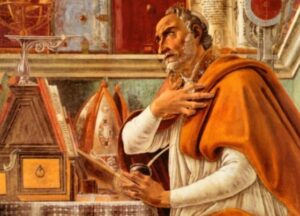 Depiction of Augustine of Hippo
Jerome (d.419) was a Latin ascetic and savant well known for his polemical attacks on dissenters. This period saw the inception of a dogmatic Latin theology, in which Augustine figured as a seminal influence, even more so than his ally Jerome. In his status role as Bishop of Hippo, Augustine supplied an inflexible cordon against heretics and pagans; his aggressive doctrine included predestination. This approach has been described in terms of:

In pressing his case on the need for salvation even if it meant applying coercion, on the eternal damnation of infants dying unbaptised, on the absolute necessity for regeneration through baptism within the church, on the exclusive power of divine grace to save or destroy, on a form of predestination which limited the number of the saved right from the moment of creation… he [Augustine] was impelled to adopt extreme positions in order to buttress his own arguments. (Rees 1988:17)

Described by some scholars as a reformer of Christian morals, Pelagius became “the leader of a large and influential circle of loyal adherents comprising not only educated aristocrats, many of them women, but also clerics who were later to form the nucleus of the opposition to his final condemnation in 418” (Rees 1988:19).
Pelagius advocated that the church should be formed of “perfect Christians,” as distinct from nominal Christians who retained pagan habits. Not merely the aggregate Christians were under criticism here; the official church hierarchy were also implied as compromising with self-indulgence and the values of mammon. Pelagius has been described as the last exponent of the ancient Christianity, in contrast to the conveniences implemented by clerics. In more recent times, the original or “primitive” Christianity is discerned as something overlaid by what the status exponents chose to substitute.
Pelagius was a baptised layman, and did not seek ordination as a cleric. Although sometimes described as a monk, he was “neither a monk nor a priest” (Rees 1988:xiv). In Rome and elsewhere, laymen and women gained prominence in the multi-faceted ascetic movement, a phenomenon which Augustine and Jerome tried to influence. However, the predestination dogma was not accepted by many monks. Pilgrims from all over the Christian world passed through the homes and meeting places of the radical Christian laypeople in Rome.
Similar to Augustine, Pelagius  resisted the Manichaean doctrine. However, he was very different in other ways. Jerome composed Against the Pelagians, censuring those who taught apatheia (freedom from passions), which entailed a belief in the attainment of spiritual perfection; this concept was deemed heretical, and is now associated with Stoics, Manichaeans, and Origen. The heresy was deemed a threat to the administering of sacraments by the clergy, who maintained a stifling  ritualism.
Pelagius wrote formal letters of exhortation to the perfect Christian life. He attracted patrons and inspired young disciples from educated families. A fair number of the latter seem to have renounced the world in a monastic spirit, including Celestius, possibly an Italian, who opted to join the clerical status programme by receiving ordination. Celestius was censured in 412, by a synod in Carthage, for holding Pelagian views.
Freedom of choice was an important aspect of “Pelagian” teaching. Nothing could make sense without this component. The individual was inspired to create better values in the decadent Roman society, and not rest content with the conventional habits. Numerous pagans in Rome had recently become Christians; the general tendency of these converts was to maintain former customs. Many of them were members of a ruling class desiring to protect their extensive properties at any cost to society. This was the underlying rationale for the imperial laws which exacted brutal punishments. These upper class “good Christians” of Rome “were capable of discussing at the dinner-table both the latest theological opinion, on which they prided themselves as experts, and the kind of judicial torture they had just inflicted on some poor wretch” (Brown 1967:347).
Unlike the layman (or monk) Pelagius, the prestigious Bishop Augustine was insensitive to the fact that crude dogmas of salvation could endorse injustices. The elect Christians could so easily abuse dissident Christians and pagans; the outsiders were sentenced to damnation by dogmas of predestination. Meanwhile, the Pelagian cause agitated at the public executions maintained by Roman ruling class barbarity at the expense of the poor and discontented.
The last decade of the fourth century CE saw many imperial edicts against paganism and heresy. Hereditary occupations were enforced in a milieu “where the secret police (agentes in rebus) seemed ubiquitous, and where the screams of those under judicial torture and the gibbets of arbitrary executions were common sounds and sights” (Chadwick 1993:222). According to some versions, Roman torture was mainly applied to slaves until the second century CE, thereafter being extended to the lower classes in society. The agonising rack and the wheel were both employed in Roman torture.
“Pelagius wanted every Christian to be a monk” (Brown 1967:348). His precise relation to monasticism is uncertain, but his ascetic outlook is evident. He advocated selling all personal possessions, and contentment with bare necessities. In contrast, Augustine favoured the affluent Christian layman disposed to vendettas and keen to fight for his property (Brown 1967:348). In many ways, the African bishops represented underlying Roman Empire social attitudes.
“For the Pelagians, man had no excuse for his own sins, nor for the evils around him” (Brown 1967:349). Augustine invented a new excuse, that of heavenly predestination for the baptised Christian elect. He asserted the transmission of hereditary sin, urging that pagan virtues were annulled by sin. Only divine grace for the Christian elect counted in this episcopal preference.
Many “Pelagians” wished to part with their enormous wealth in the pursuit of renunciation, a factor basically foreign to the pedagogical and episcopal outlook. “Pelagians” asserted that the (Christian) rich were damned, in contrast to the clerical insistence that non-Christians are eternally blighted. Augustine, and other churchmen, counteracted excess wealth being given to the poor by a pious injunction to endow Catholic monasteries (Brown 1967:350). The clergy and establishment monks depended on wealthy landowners, who were thus screened from criticism.
The letters of Augustine to the Roman noblewoman Proba are disconcerting. The bishop did not exhort Proba to change her situation, but merely to dwell on pious themes like corruptibility. She was “the heiress of a vast agricultural empire, acquired by rapine and maintained with a selfishness that had aggravated the miseries and resentments of the Gothic disaster” (Brown 1967:351). The Bishop of Hippo missed out basic causality in his deceptive attitude to Roman life. Whereas the renunciate “Pelagians” began to perceive the realistic deficit of huge problems underlying social and political existence. 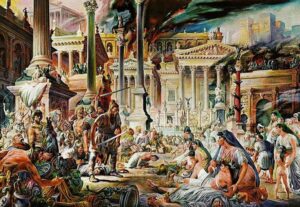 Visigoth sack of Rome in 410 CE. National Geographic drawing, 1962
Pelagius was supported at Rome by Christian aristocrats. When Alaric led the Visigoth invasion of the city in 410, the shock was devastating; this was the first time for almost eight centuries that Rome fell to an enemy (Sack of Rome). Now the wealthy Romans were the underdogs to torture; the plundering Visigoths subjected them to torment for the purpose of locating their wealth. The victorious Alaric soon departed from Rome, dying the same year. Pelagius  fled to North Africa and Jerusalem, “where he attempted to lead a more formal monastic existence” (St. Clair 2004:3).
In 418, the Emperor Honorius (rgd 384-423) ordered the banishment of Pelagius and Celestius from Rome (wrongly assuming they were still in that city), while condemning all those who denied the Fall (meaning original sin). In unison, the Council of Carthage issued a series of nine canons against “Pelagianism.” Pope Zosimos, under pressure from the conservative African bishops and Roman opponents, condemned and excommunicated the heretics. Augustine, the chief instigator, made further hostile gestures. “No fewer than ten of his fifteen anti-Pelagian works date from the period following the condemnation of Pelagius and Celestius in 418” (Rees 1988:99). As a consequence of this opposition, Pelagius was expelled from Palestine, seeking refuge in Egypt, an event leading to his oblivion.
Meanwhile, eighteen Italian bishops appealed against the condemnation, only to find themselves condemned, excommunicated, and banished from their homeland (Rees 1988:141). The repressive clerical programme lasted in variants for over a thousand years.
Pelagius was condemned for a new heresy. The orthodox version of his supposed arrogance has been revealed as a fiction (Bonner 2018). Pelagius did not advocate anything new or original, instead defending a mainstream Christian view that differed from episcopal preferences. Pelagius was not the leader of a separatist group, but merely one of the many exponents of teachings favoured by the ascetic movement emerging amongst Christians. All his themes were already in wide circulation. “Pelagianism” was an invention of official Christianity (Bonner 2018).
The argument is strong that, because Augustine was not able to provide proof of any precedent for his innovative doctrines of predestination and original sin, he resorted to a caricature of his major critic (Bonner 2018). The teaching of Pelagius amounted to that of the widespread Christian ascetic movement, a trend appropriated and subverted by ecclesiastical schemes for supremacy.
The works of Pelagius were extensively copied in later centuries, being attributed to other Christian writers. There was no effective difference between his works and those of other  writers associated with the ascetic movement (including Jerome). The objective was to live the life advocated by Jesus, not the substitute improvised by ambitious clerics.
Bibliography
Bonner, Ali, The Myth of Pelagianism (Oxford University Press, 2018).
Brown, Peter, Augustine of Hippo: A Biography (London: Faber, 1967).
De Bruyn, Theodore, trans., Pelagius’ Commentary on St. Paul’s Epistle to the Romans (Oxford University Press, 1993).
Chadwick, Henry, The Early Church (Harmondsworth: Penguin, 1967; revised edn, 1993).
Evans, Robert F., Pelagius: Inquiries and Reappraisals (New York: Seabury Press, 1968).
——–Four Letters of Pelagius (New York: Seabury Press, 1968).
Ferguson, John, Pelagius: A Historical and Theological Study (Cambridge: W. Heffer and Sons, 1956).
Rees, B. R., Pelagius: A Reluctant Heretic (Woodbridge: Boydell Press, 1988).
——–Pelagius: Life and Letters (Boydell, 2004).
St. Clair, Craig,  A Heretic Reconsidered: Pelagius, Augustine, and “Original Sin” (School of Theology and Seminary Graduate Papers/Theses 4, 2004, online).
Kevin R. D. Shepherd
ENTRY no. 47
Copyright © 2021 Kevin R. D. Shepherd. All Rights Reserved. Last modified October 2021.