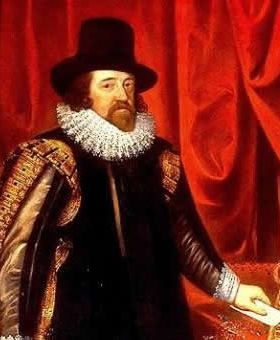 Sir Francis Bacon (1561-1626) is celebrated as the founder of modern induction, the early champion of empiricist methodology. Educated at Cambridge University, he took up a career in law, entering the House of Commons at an early age. Gaining a role at the court of Elizabeth I, he became far more successful under James I. Knighted in 1603, he eventually entered the House of Lords in 1617, thereafter acquiring the position of Lord Chancellor in 1618.

Bacon early reacted to the Scholastic curriculum at Trinity College, where he developed a strong aversion to the Aristotelianism of his day. He dismissed syllogistic reasoning, preferring the atomist theory of Democritus. “Although he did not deny that the course of nature exemplifies a divine purpose, he objected to any admixture of teleological explanation in the actual investigation of phenomena” (Russell 2000:528). Aristotle, like Plato, incorporated a version of transcendent purpose in the universe; Bacon opted for the empiricist approach to natural philosophy. Aristotle is associated with the view that truth can be reached via sophisticated argument. Bacon challenged the convention, maintaining that truth requires evidence from the physical world.

The major criticism aimed at Bacon’s career relates to the year 1621, when he became Viscount of St. Albans. Soon after, his enemies at Parliament charged Bacon with accepting bribes in his office as a judge. Admitting to the offence, he was fined and sentenced to prison in the Tower of London. However, he spent only a few days in the Tower; the fine was waived. Although he gained a royal pardon, Bacon was banished from court. He lost his political offices, while retaining his titles and personal property. He retired to his home in Hertfordshire, where he devoted himself to writing, an activity formerly confined to his spare time.

Defenders of Bacon emphasise that the acceptance of bribes in a lawsuit was common practice in his era. They also stress that he admitted to his laxity; he stated that he had given a verdict against some persons who had paid him. In terms of general trends, seventeenth century writers praised Bacon, and eighteenth century commentators idolised him. In contrast, assessors of the nineteenth and early twentieth centuries were inclined to debunk Sir Francis as a charlatan and quack (Mathews 1996:4).

His most popular book was the Essayes (first edn, 1597), which initially bore the sub-title of “Religious Meditations.” The 1613 edition identified Bacon as the King’s Attorney General. The original ten essays became fifty-eight in the 1625 edition. The Essayes are now  regarded by some as an important philosophical work, though other readers are more reserved in assessment. Oxford University Press describe the Baconian essay format in terms of: “With uncompromising candour, he exposes man as he is, not as he ought to be, examining such givens of Renaissance power as negotiating for position, expediting a personal suit, speaking effectively, and the role of dissimulation in social and political situations.”

The Essayes exhibit “civil business” as a dominant concern of many passages. “They have been read variously as commonplace books writ large, as contributions to psychology and political science, and as a mirror for the Renaissance ruling class” (The Oxford Francis Bacon Vol. 15: The Essayes or Counsels, Civill and Morall, ed. Michael Kiernan, 2000:xix). “Though the volume contains some observations relating to those in power, the primary emphasis is upon effective, prudential behaviour for the individual intent upon ‘making it’ – a kind of political vade-mecum” (ibid:xxi).

Thirteen editions of Essayes were published during the author’s lifetime. The literary success reflects his prominent career in high class society. “The role of [royal] counsellor was one Bacon craved from his earliest days” (ibid:xxvi). He lost that role during the last few years of his life.

A commentator refers to Francis Bacon as a genius with pronounced flaws. Bacon lived “two lives,” meaning the roles of philosopher and politician. His political career “absorbed a large part of his time and energy, pitting him against rivals in a continual competition for office and power, diverting him from pursuing some of his most cherished intellectual goals, and forcing him to leave his main philosophical enterprise fragmentary and unfinished” (Zagorin 1998:3).

Some interpretations have attempted to span the apparent gulf between the “two lives” of Bacon. His reform of natural philosophy has been viewed in terms of a plan to strengthen the powers of the Crown (Martin 1992). This suggestion requires proof. His different proposals for legal and philosophical reform conceivably had elements in common. His close connection with aristocratic circles is a fact.

In the Parliament of 1593, Bacon aroused the displeasure of Queen Elizabeth I (rgd  1533-1603). In a speech, he obstructed a bill to gain new taxes. That was the last time Bacon ever resorted to an independent stance against authority. The Queen “never fully forgave his offence” (Zagorin:9), despite Bacon’s subsequent programme of deferral to royalty. He was requested to participate in the interrogation of prisoners at the Tower of London; these men were suspected of treason and plotting to assassinate the Queen. “At times during these years and later he was present when torture was used to extract information from suspects” (ibid). Court patronage was a heavy price to pay where scruple was concerned, a situation continuing under the rule of James I (rgd 1603-1625).

Private memoranda of Bacon, dating to July 1608, is revealing. “Writing exclusively for himself, he frankly avowed his political ambitions and the cunning designs by which he proposed to realise them. In this context he regarded other persons purely as means he could exploit to attain his own ends. His object was to aggrandise himself by craft, flattery, and displaying himself in the best possible light” (Zagorin 1998:19-20).

Philosophers have frequently dwelt upon the more edifying contents of The Advancement of Learning (1605), reflecting Bacon’s struggle with the academic tradition and humanism. Bacon here opposed the curriculum he had known at Cambridge University, advocating an extensive reform by the use of an empiricist model.

Subsequently, he composed unpublished tracts which furthered the same theme. Favouring the natural philosophy of Democritus, he opposed the scholastic version of Aristotle as relayed by the Christian Schoolmen. However, he admired the radicalism of Friar Roger Bacon. Belief in authorities was considered an obstacle to Baconian induction. Sir Francis also opposed Renaissance occultism, associated with Paracelsus (1493-1541) and others who had assimilated magic, astrology, and alchemy (Rossi 1968).

The Novum Organum (1620) was intended as a sequel to Aristotle’s version of logic. The Baconian method was here presented in aphoristic format, intended to avoid dogmatism, and to reveal the correct demonstration of natural philosophy. Bacon declared this work to be part of the ambitious project he called Instauratio Magna (Great Instauration), which he was not able to complete.

Bacon came to the fundamental insight that facts cannot be collected from nature, but must be constituted by methodical procedures, which have to be put into practice by scientists in order to ascertain the empirical basis for inductive generalisations. (Jurgen Klein, “Francis Bacon,” Stanford Encyclopedia of Philosophy)

The utopian Nova Atlantis was composed in 1623. This distinctive novel conveyed the vision of a necessary transformation of society. Bacon here depicted the New Atlantis in terms of the inhabitants of Bensalem, an imaginary island in the Pacific. The ideals represented here include the abolition of slavery, freedom of religious expression, and improved rights for women. His theme of an educational college has been considered the harbinger of subsequent university models and scientific curricula.

Bacon attempted, without success, to persuade James 1 to establish a royal institution for the advancement of science. Decades later, when Charles II founded the Royal Society in 1662, the members “were largely Baconian in their scientific approach, and regarded Francis Bacon as the intellectual godfather of the society” (Magee 1998:74). The influence of the Royal Society, based at Gresham College in London, was pivotal in scientific developments.

Despite the elevation, strong criticisms have been  lodged against the Baconian advancement of science. These range from complex academic discussions of inductive methodology to relatively popular protests at the problems created by technology. The utopia did not arrive. Spinoza was an early critic of Bacon, not being a convert to  induction. Whereas Leibniz credited that Bacon was superior to Descartes. British scientists like Isaac Newton praised Bacon, considering him an important forerunner, as did the French encyclopaedists of the eighteenth century. Immanuel Kant (1724-1804) dedicated his Critique of Pure Reason to the British empiricist.

Bacon emphasised observation and experiment in the discovery of causal connections. There was also a recognition on his part that science additionally requires deduction to move from generalisation to particular instances. However, “the part played by deduction in science is greater than Bacon supposed” (Russell 2000:529). Another commentator has reflected:

For one thing, it is not clear that the Baconian procedure, taken by itself, leads conclusively to any general propositions, much less to scientific principles or theoretical statements that we can accept as universally true…. it can be said that Bacon underestimated the role of imagination and hypothesis (and overestimated the value of minute observation and bee-like data collection) in the production of new scientific knowledge. And in this respect it is true that he wrote of science like a Lord Chancellor, regally proclaiming the benefits of his own new and supposedly foolproof technique instead of recognising and adapting procedures that had already been tested and approved. (David Simpson, “Francis Bacon,”  Internet Encyclopaedia of Philosophy)

A well known version of Bacon’s death reads: “He died of a chill caught while experimenting on refrigeration by stuffing a chicken full of snow” (Russell 1946; 2000:527). A more recent deduction is that Bacon’s death was caused by experimentation with opiates (Jardine and Stewart 1999).