Aversion to Caste and Miracles 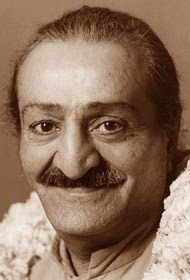 A prominent aspect of the “alternative” vogue in Western countries has been enthusiasm for Eastern gurus and other mentors. A number of these entities transpired to exhibit complicating traits, causing disillusionment amongst their followers. Meher Baba was not one of these, his activities dating to an earlier period.

The career of Meher Baba (1894-1969) evidences a clean moral record. He visited the West in the 1930s, and again in the 1950s, thereafter remaining mostly in seclusion until his death. The major criticism levelled at him is that of the avataric claims he made in his later years. The word avatar, signifying divine incarnation, is derived from Hinduism.

Meher Baba (Merwan Sheriar Irani) fits a rather unusual category of “guru,” the reason being that he was not a Hindu but an Irani Zoroastrian. Both his parents were émigrés from Central Iran. The Iranian city of Yazd is a more appropriate geographical point of reference here than Varanasi or Pandharpur. Meher Baba was born in India, at Poona (Pune), a British colonial cantonment town. He was not a Parsi, as is sometimes mistakenly assumed. This ethnic complexity has made his career more interesting to me. My attitude is critical of glosses and quite independent of the devotional movement forming in his name.

Poona was a centre of the British Raj. There, while attending the Deccan College in 1913, young Merwan Irani encountered Hazrat Babajan (d.1931), an aged female saint of Pathan birth who has Sufi repute (see Shepherd 2014). The interaction changed his life completely. He became very introverted, subsequently beginning an association with Upasani  Maharaj for several years from 1915. This phase evidences many features that lack due explanation. Afterwards Merwan established his first ashram at Meherabad (Arangaon), near Ahmednagar, a city in Maharashtra. He became known as Meher Baba.

A visitor to Meherabad, in 1930, was the influential British occultist Paul Brunton (1898-1981). He penned a very unreliable report of the Irani in his popular book A Search in Secret India (1934). An obvious discrepancy has struck many readers. Brunton referred to the low and receding forehead of the Irani, which could mean that the British critic suffered from an optical deficiency. In reality, the cranium of Meher Baba was well proportioned, and also of substantial size in relation to his body. There are other discrepancies in Secret India far less well known.

The Irani mystic was notably averse to the caste system. He refused to sanction that problem, instead championing the cause of Dalits (untouchables). This was a feature of his activity during the 1920s, when he established Meherabad ashram. The fact is that, after an initial resistance, he eliminated caste at his ashram, not permitting the ranking or dining protocol generally found in other Indian ashrams.

Another feature that tends to distinguish the outlook of Meher Baba from other gurus is his attitude to miracles. Although in some early statements, he seems to have acknowledged the existence of “miracles,” in later years he frequently gave that subject a low rating, also disowning the performance of miracles in his own case. “Many miracles have been attributed to me, but I do not perform miracles; I do not attach importance to miracles” (quoted in Shepherd 2005:110).

Meher Baba was also strongly critical of tendencies, in other followings, to create an instinct for “miracle” phenomena. In relation to Shirdi Sai Baba (d.1918) and Upasani Maharaj (d.1941), both of whom he personally encountered, he was disapproving of the hagiographical preference of devotees for miraculous events.

In 1925, Meher Baba commenced silence, a restraint which he maintained until his death. He continued to communicate by means of an English alphabet board; many years later, he resorted to a hand gesture language. In this manner he dictated numerous messages and discourses, and also two books on spiritual evolution, only one of which was published during his lifetime (in 1955). That contribution is unusual for an eclectic vocabulary employing Sanskrit/Marathi and Persian terms drawn from the Vedantic and Sufi traditions (the Hindu component was not exclusively Vedantic).

In 1929 he made a second journey to Iran, visiting the capital of Isfahan and his ancestral Yazd. Iranian observers registered that his silent approach was completely different to the style of Islamic preachers who were frequently encountered. Meher Baba aroused much interest from both Shia Muslims and Zoroastrians (also Bahais). He  was requested to meet the Shah of Iran. However, he declined the prospect of a royal encounter, instead preferring an incognito profile. He even resorted to the difficult overland route from Bam to Duzdab on his return to India, thus ensuring a respite from attention (Shepherd 2005:115ff).

A British medical doctor wrote an unusual book describing the activity known as “mast work,” conducted by Meher Baba during the late 1930s and 1940s (Donkin 1948). That undertaking  was definitely not a speciality of Hindu gurus. The Irani appears to have been quite unique in this respect. The project involved many journeys in India and Pakistan, locating and ministering to numerous Hindu and Muslim “God-intoxicated” persons. The mast work lacked publicity. An attendant action encompassed sadhus and the poor. Meher Baba emerges here as a philanthropist preferring anonymity. The absence of limelight is surely notable.

Meher Baba was fluent in several languages, including Persian, Gujarati, Marathi, and English. He gained Muslim followers in addition to Zoroastrian and Hindu devotees (also Westerners). He was  familiar with Sufism; however, he did not identify with that tradition, remaining non-denominational. The intercultural complexion of his teaching is another factor of difference with the Hindu gurus.

Meher Baba’s evolutionism incorporates reincarnation, in an unusual format rigorously tracing a sequence of progression through the diverse species-forms until the human stage is reached. He does not accommodate reverse incarnation from humans into animals, a feature found in Hinduism and elsewhere.

This treatment explains the growth in consciousness attendant upon evolution, a factor generally missing in mystical accounts. Further, there is the advantage of description in terms of impressions (sanskaras), again quite methodically elaborated. Consciousness is composed of impressions; in this light, the reincarnation process is made more explicable. The exposition of Meher Baba differs from more well known versions of transmigration that do not clarify such complexities; certain canonical traditions exhibit discrepancies in terms of, for example, retrograde incarnation from human to animal.

The format of Meher Baba differs from traditional Vedanta in the evolutionist criteria supplied. There is also a divergence from canonical Sufism, which does not teach reincarnation. Some Muslims of earlier centuries inclined to versions of transmigration (tanasukh) associated with the Pythagorean heritage.

In general, Meher Baba is not favoured by “new age” adherents, who have been far more enthusiastic about gurus like Shri Aurobindo, Bhagwan Shree Rajneesh, Maharishi Mahesh Yogi, Sathya Sai Baba, and Swami Muktananda. The Esalen Institute, in California, endorsed Aurobindo during the early years of their enterprise, promoting his doctrines to such an extent that these are well known by comparison with teachings of other figures. The Findhorn Foundation favoured Rajneesh and Sathya Sai Baba during the 1980s and 1990s.

The literature on Meher Baba is mainly in a devotional category. I have contributed a different type of evaluation. “Though no devotee of Meher Baba and a sharp critic of Meher Baba’s followers, Kevin Shepherd turns a critical eye on [Paul] Brunton’s account, in Meher Baba, an Iranian Liberal, pp. 146-76” (Parks 2009:223 note 31). The devotee editor Ward Parks evidently approved of my scepticism concerning Brunton, though he failed to perceive that I did not criticise all the followers, as specific statements in Iranian Liberal do confirm. There is no necessity to be a devotee in the pursuit of researching details relevant to factual occurrence.

Certain developments on Wikipedia are viewed with suspicion, implying collusion (or strong convergence) between a pseudonymous Meher Baba supporter and a militant defender of Sathya Sai Baba (Wikipedia Anomalies: Arguments). The tendency to hate campaign is a cultic drawback, evident some years ago in the American branch of the Sathya Sai Baba sect (Internet Terrorist). The Meher Spiritual Center at Myrtle Beach (South Carolina) is also associated with a hostile tactic (Meher Baba Movement).

Donkin, William, The Wayfarers: An Account of the Work of Meher Baba with the God-intoxicated, and also with Advanced Souls, Sadhus, and the Poor (Ahmednagar, 1948).

Jessawala, Eruch, That’s How It Was: Stories of Life with Meher Baba (Myrtle Beach SC, 1995).