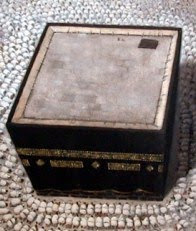 The Ka’ba at Mecca

The significance of Husayn ibn Mansur al-Hallaj (c.858-922) is substantial. This unorthodox Sufi mystic was executed as a heretic in Abbasid Baghdad. His resurrection in literary terms is largely due to the research of the French scholar Louis Massignon (d.1962), whose multi-volume commemoration is a major work in Islamic studies (with some issues of interpretation attached).

The subject is not an easy one to depict, though relevant to the history of religion. Hallaj aroused proletarian support and official censure. His oppressive trial reveals an effort to remove a source of objection to the agenda and ruses of politicians and financiers. The decadent era of the late Abbasid Caliphate was not in the interests of citizens at large, despite efforts of the “virtuous vizier” Ali ibn Isa to offset corrupt fiscal policy.

Sufficient detail survives to trace the fate of chief opponents of Hallaj. They did not escape the calamitous cycle of violence initiated by that time in political circles. Even the Caliph al-Muqtadir (rgd 908-932) was a loser, eventually falling victim to his commander-in-chief, the veteran Greek soldier Munis al-Khadim.

The drama represented by the life of Hallaj is unique in Sufi annals, covering not merely religious matters, but also social and political dimensions of strong relevance. Strangely enough, the subject has often been reduced to a form of acute abbreviation, and even caricature, in medieval Islamic sources and more recent references. Professor Massignon commenced the process of investigating what really happened behind the veils of legend, poetry, hagiology, and conservative hostility. He opted for a “martyr” portrayal, which is confusing in some respects.

Hallaj was born in the Iranian province of Fars, his paternal forbears being Zoroastrians. His grandfather Mahamma remained a Zoroastrian.  His father Mansur converted to Sunni Islam. Mansur was a cotton-carder, a humble vocation which his son Hallaj is also thought to have practised at times. There was much Iranian artisan activity in early Sufism, including the Baghdad “school” primarily associated with Junayd.

Hallaj received a Sunni education in Arabic at the Iraqi town of Wasit, being trained in the Quran and related matters by Hanbali traditionists. However, he was not satisfied with the orthodox digest of reference, instead gravitating to Sahl al-Tustari (d.896), who lived at Tustar in the Iranian province of Khuzistan. Sahl was a Sufi commentator on the Quran; his views were too esoteric for the canonists. Sahl emphasised the conflict between the nafs (lower self) and the qalb (heart), a mystical teaching of some complexity. Hallaj may have acquired from Sahl the belief in a spiritual hierarchy of saints (awliya), which in origin appears to have been pre-Islamic.

After two years, Hallaj apparently separated from Sahl at the time of a major political unrest, namely the Zanj Revolt, centred in southern Iraq. Black slaves from East Africa were opposing Abbasid rule in a violent conflict causing many deaths. The slaves lived in shocking conditions. They were dismayed to find that conversion to Islam made no difference to their plight. The period of revolt was 869-883, during which the slaves (and others) defeated several Abbasid armies sent to crush them. Extensive slave labour was used by the ruling class to accomplish large scale irrigation in Iraq. This war resulted in the abandonment of plantation slavery. We do not know how Hallaj viewed this violent phase.

The Zanj strife spread into Khuzistan. Hallaj moved to Basra, a major urban centre in Iraq, likewise in the shadow of the Zanj rebellion. There he married the daughter of Abu Yaqub Aqta al-Basri, a disciple of the famous Sufi Junayd (d.910), who lived at Baghdad. Hallaj also became a Sufi convert, adopting the ascetic woollen robe in what appears to have been an initiation by the Arab Sufi and traditionist Amr ibn Uthman al-Makki (d.903/4), another disciple of Junayd.

Setbacks occurred. Hallaj and Makki had a disagreement, resulting in the ostracism of Hallaj as a heretic. Hallaj separated from formal Sufism, moving at an independent tangent. He may have encountered Junayd, but did not remain one of the Baghdad circle (if he was ever a part of it, which some scholars think unlikely). A legend of friction between Junayd and Hallaj subsequently featured in Sufi hagiology. More reliable is the factor of disagreement with Makki, who eventually accepted the prestigious and conventional position as a judge (qadi) at Jeddah (a move that was not favoured by Junayd). Whereas Hallaj became an unorthodox preacher and gnostic.

Reconstructing the teaching of Hallaj is not straightforward; his output only survives in fragments. The evocative Kitab al-Tawasin is not comprehensive. Massignon deduced that the subject cultivated a liaison with Iranian literati who were familiar with Greek philosophy, medicine, and alchemy. From them Hallaj derived some Greek concepts, expressed in an Arabic (and Islamic) mode. An element of universalism has been discerned in Hallaj (Universalist Tendency). Professor Herbert Mason writes:

He [Hallaj] was accused by his enemies of dissimulation and opportunism by associating with neo-Hellenists, philosophers, aesthetes, pseudo-mystics, magicians, Christians, Jews, Zoroastrians, Manichaeans, Hindus, Buddhists, the rich and the poor. (Mason 1995:54)

Hallaj was in friction with influential Mutazili theologians, who resisted Sufi concepts, especially the teaching about a hierarchy of saints. Various opponents accused him of charlatanism and sorcery. Makki, and some other orthodox Sufis, spread the rumour that Hallaj had made a magical pact with the jinn (demons). This exotic theme is very unconvincing. More likely, his version of (Sunni) Sufism was too radical for the conservatives.

He undertook lengthy journeys, moving as far afield as India and Central Asia. Hallaj apparently gained a following amongst the Khalaj Turks, who had become Islamised. At some point, a colony of adherents formed at Talaqan, in the vicinity of Balkh. He may have journeyed as far as Qocho (Ma Sin, near Turfan), a sector in Chinese Turkestan where the Uighur Turks had become Manichaeans.

His mode of preaching appears to have been curtailed during his earlier years. He was apparently limited to use of the Arabic language. Hallaj needed interpreters to communicate with other linguistic audiences, including those speaking Persian dialects. He emerged far more into open profile during his last years at Baghdad.

Hallaj undertook three pilgrimages to Mecca, all of them distinctive for varied reasons. The first involved a year of ascetic discipline in a secluded courtyard, exposed to sun and rain. Some ten years later, he returned, this time with many disciples. Favoured by the Meccan authorities, he was opposed by a group of orthodox Sufis associated with Amr al-Makki. Several years later, his third hajj occurred in 903, lasting for two years; his “farewell address at [Mount] Arafat” was interpreted by Massignon in terms of “the denouement of his final crisis of conscience” (Mason 1994:14). This event is here viewed as the preparation for his final phase of life at Baghdad, in which he faced official disapproval.

Travelling via Jerusalem to Baghdad in 905, he there resided with other émigrés, associates from Tustar. In the Tustari quarter, Hallaj built an enclosure containing a miniature Ka’ba, the cube-like shrine at Mecca. His purpose was evidently to mediate the hajj (pilgrimage) to his own community. Many mawali (non-Arab converts to Islam) were not able to make the dangerous journey to Mecca. Indeed, “access to the holy cities [of Arabia] was not completely guaranteed to the Iraqi pilgrims by the Banu Asad and Banu Shayban patrols” (ibid:53).

The audience for his unusual preaching at Baghdad was substantially Arab, meaning ex-Bedouins who had fled from famine and poverty. His sympathy with distressed elements of the population was accompanied by mystical allusions (which his son Hamd did not fully understand). In addition to the proletarian factor, there were also upper class contacts; Hallaj was regarded as a saint by a number of dignitaries, including state secretaries. He effectively represented reform; however, he was not a militant preacher. Change and public discontent were resisted by some influential politicians and bankers.

Hallaj was implicated as a sympathiser with Sunni reformist agitation. He left Baghdad and went into hiding at Sus. After three years, he was located and brought back to Baghdad. His persecutors wished to have him condemned as a heretic. Their plan was foiled by the new wazir (chief minister) Ali ibn Isa. However, the ongoing opposition proved severe; he was confined in the palace of the Caliph al-Muqtadir, while the struggle between his supporters and opponents continued. This was the situation during 913-22.

A major opponent was the wazir Hamid ibn al-Abbas, a wealthy landowner, tax farmer, and palace banker. This man owned hundreds of slaves. Hamid gained a reputation for drunkenness. In friction with the prudent minister Ali ibn Isa, Hamid hated Hallaj. This formidable enemy was at the centre of a notorious court plot that ruthlessly created a famine, private gain being the objective. The cost of bread rose acutely. A public riot was the consequence in 921. The protesting tradesmen would have included Arabs, Iraqis, and Iranian mawali.

Hamid gained the upper hand, having Hallaj imprisoned with the approval of the fickle Caliph al-Muqtadir. This development occurred after an obscure book of Hallaj was indicted on grounds of blasphemy. The Hanbali proletarian supporters of Hallaj demonstrated against Hamid in the streets of Baghdad. The ruthless wazir had their leader killed. The brutal guards of Hamid smashed the skull of the courageous Ibn Ata (a Sufi).

The dubious trial of Hallaj was reopened. He was condemned to death as a heretic on the basis of flimsy accusations. “One report conveys that the pretext for condemnation was a passage in his writings that advocated the construction of replicas of the Ka’ba for those unable to travel to Mecca” (Trial and Execution). The Caliph was persuaded to endorse the death sentence.

Hallaj was cruelly executed, a measure of the corrupt Abbasid court run by manic commercial interests. He was mercilessly flogged, and then suffered intercission, meaning that his hands and feet were cut off. Hamid callously delayed the execution, which was decapitation.

Two years later, Hamid was killed by a crowd of resentful citizens whom he had abused. Perhaps his abject slaves rejoiced. Assisting the Sunni politician Hamid was a group of Shi’ite bankers and intriguers who pursued career gains at the public expense. Not all the persecutors escaped unscathed, including the fabulously wealthy Caliph, whose empire collapsed (Aftermath).

The memory of Hallaj survived in diverse formats. He was a unique “universalist” (and radical Sufi) of his time, with a courage (like that of Ibn Ata) to stand against the corrupt ruling classes and their regime of oppression and torture.

Sheriff, Abdul, “The Zanj Rebellion and the Transition from Plantation to Military Slavery,” Comparative Studies of South Asia, Africa and the Middle East (August 2018) 38(2):246-260.